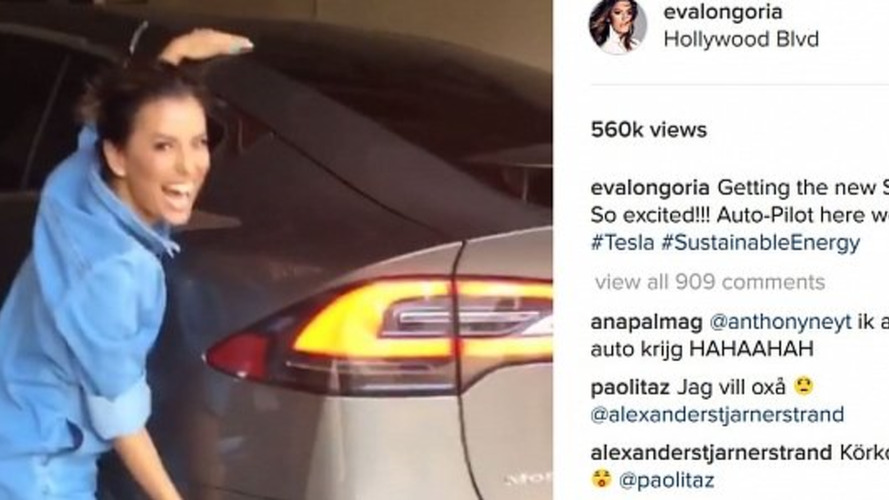 As celebrity endorsements go, it is one.

Celebrities have always loved SUVs, but growing concerns about the environment and a desire to be seen to be doing something to help have made SUV ownership difficult. Hollywood will have been rejoicing, then, when Tesla unveiled the Model X, solving the problem at a stroke.

Actress Eva Longoria is among the first celebrities to take delivery of a Model X, posting pictures of it on Instagram. 'So excited!!!', she wrote in the post, and doesn't she look it? Amusingly, the Desperate Housewives star looks barely taller than the car's belt-line, but then the Model X is truly vast.

Longoria is a serial SUV owner, a string of Range Rovers, G-Wagens, and Escalades passing through her hands. More recently, she bought a Model S, which obviously impressed her enough to buy a Model X. There are the same car underneath, after all.

You can be sure Longoria will just be one a veritable tidal wave of Hollywood celebrities who buy a Model X. Curiously, as far as we're aware, that other SUV of the moment, the Bentley Bentayga, hasn't found much favour in Hollywood yet. Either they simply haven't been delivered yet, or its profligate nature has put everyone off. The only celebrity owner we're aware of so far is David Beckham, and he doesn't concern himself too much with environmental issues.

Though Bentley is doing fine without celebrity endorsements. Even if it doubled Bentayga production, it still wouldn't be able to build them fast enough.