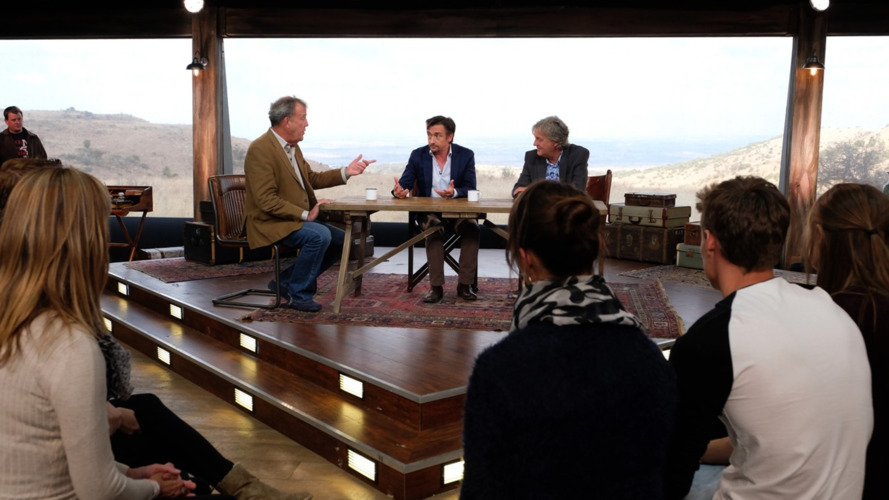 The first images of The Grand Tour's travelling studio tent emerged on Twitter on Sunday after the first filming session in Johannesburg, South Africa.

As you can see, it's a huge and elaborate construction, with space for an audience of several hundred and a stage. But the decoration looks surprisingly homely. Indeed, it looks like the kind of thing a 19th Century explorer would travel with.

The three presenters tweeted about their first day in their new home. Richard Hammond led with, "So, today we opened our new office. In South Africa this week. Next week...?"

Jeremy Clarkson was effusive, "I loved today," and "Some people came to see out first ever Grand Tour show today. God I love Johannesburg."

While James May went with, "I'm sorry, I forgot to wave."

Audience members tweeted on the hashtag #TheGrandTourJoburg in the run-up to filming, but no details of what happened in the studio have been leaked. It's highly likely the audience are subject to a non-disclosure agreement, with heavy penalties for breaking it.

Further studio filming sessions will take place in the United States, United Kingdom and Germany. It isn't clear if just one show will be filmed in each location, or several. Amazon Prime has commissioned 36 episodes, in three seasons of 12.

The premiere date has not yet been announced but, given when studio filming started, you could extrapolate a possible date of mid- to late October.

If so, it will be very interesting to see if it overlaps with the next season of Top Gear, which is set to start in September, and what effect that may have on both shows' ratings.