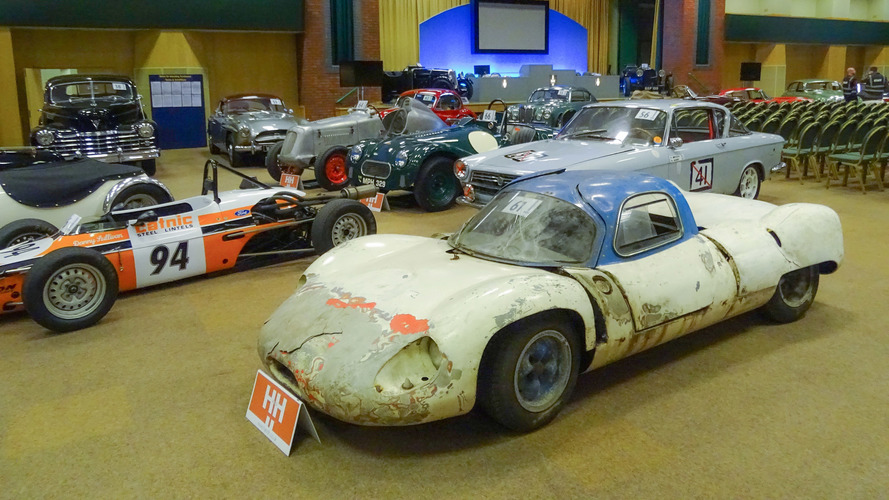 We hope to see this lightweight racer back on the track someday.

Collector car buyers continue to find something special about ratty barn finds, as H&H Classics' recent sale of this 1966 Costin Nathan works prototype shows. The little racer needs a complete restoration before it can hit the track again. However, bidders clearly saw something special about the vehicle because the hammer dropped at 81,224 pounds ($105,340) after fees, and 71,000 pounds ($92,070) of that was just for the car. H&H Classics originally estimated a price of 25,000 to 30,000 pounds ($32,420 to $39,000).

The 1960s were a special time in motor racing when practically anyone could build a chassis, source an engine, and compete against factory-supported teams. Lotus engineer Frank Costin came up with this swoopy design and followed Colin Chapman's maxim to "add lightness." Costin created a wood monocoque chassis and used tubular steel subframes at each end to carry the independent suspension and brakes. A 1.0-liter tuned Hillman Imp four-cylinder engine made around 96 horsepower, and he covered the shape in an aluminum body. In the era, this beauty raced in the United Kingdom and Europe against small-displacement cars like Abarths. It was originally an open-top car, but a later owner modified the exterior into a coupe.

The old gal is in rough shape today after sitting in a garage for the last 45 years, and the new owner has quite a challenge ahead. Even the original powertrain is gone, and instead of the small-bore engine, the Costin has a Ford-based twin-cam and Hewland MK5 gearbox. We hope the winning bidder has the funds to bring this car back to original condition, and we'd like to see it racing at Goodwood sometime. Check out the video below to watch the auction and an interview with Costin racer Roger Nathan.

The car emerged from its 45-year slumber when a Manchester company carried out a house clearance. Racing as both a Spyder and GT in the 1960’s, the two-seater now requires total restoration. Appearing to be substantially complete, it comes with a highly prized Hewland MK5 gearbox and Ford-based Twin-Cam engine in pieces.

Despite its short career, the Costin-Nathan proved to be a very capable racer. Surviving examples showcase Costin's unique talent for designing lightweight and very aerodynamic racers.

The car is the original Works Prototype as raced with considerable success by Roger Nathan in 1966. Bought by the previous owner (deceased) on 6th January 1967, without the initial Imp engine, it was given a Twin-Cam powerplant coupled to a Hewland Mk 5 transmission.

The driver was to be Chris Meek and the car was further modified with a hard-top to allow it to run as a GT.  A large folder of correspondence charts the trials and tribulations of the next three years which added but a single class win at Snetterton in May 1967 to the two-seater’s impressive racing resume.

Former race-driver, John Markey, who runs the H&H Classics Hindhead Surrey operation, says: “It is an amazing restoration project and a true 'barn find' slumbering in the late owner’s garage for the last 45 years.  This is quite a special car. It is the original Works Prototype as driven with success by Roger himself in ’66. I’m probably dewy eyed having raced one quite extensively in the 60’s. From a personal angle, the car as an Imp engined GT was a delight to drive, very quick in its class with neutral handling and my car did the Targa Florio, the Montjuich 12 hours and an event at Anderstorp in Sweden without any mechanical problems whatsoever.”