Does anything look better than this matte black Porsche 918 Spyder up for auction? 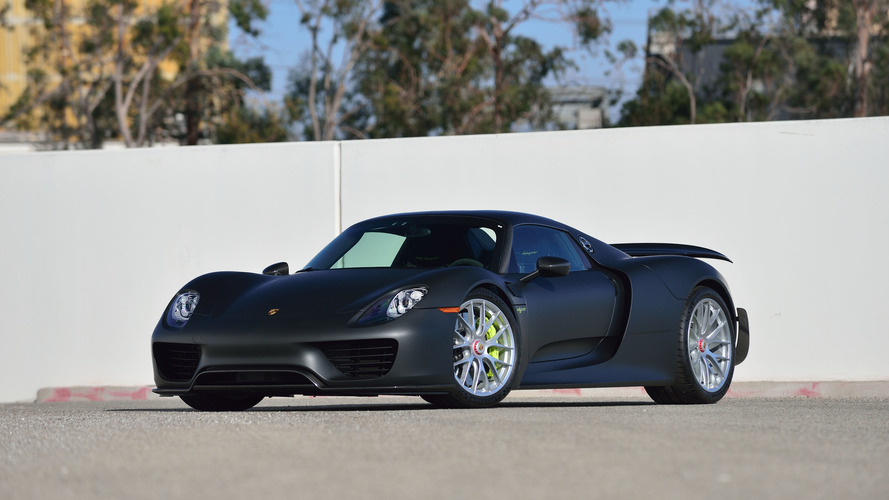 The buyer made sure to choose the most lightweight options for the hypercar.

Mecum's upcoming auction in August during Monterey Car Week is teeming with fantastic vehicles, but this 2015 Porsche 918 Spyder is something special among them. The roadster is the only example in the United States with no exterior paint from the factory. Instead, Porsche wrapped much of the body in matte black and left pieces like the roof and rear wing in raw carbon fiber. The result shed just over five pounds (2.03 kilograms) off the already lightweight hypercar.

The original owner apparently wanted the lightest 918 Spyder possible, so the customer also ordered the Weissach Package. The $84,000 option shed 90.3 pounds (41 kg) off the standard hypercar through a radical diet, including things like magnesium wheels, titanium chassis bolts, and lighter brakes. The Weissach-optioned cars accelerated to 62 miles per hour (100 kilometers per hour) in a brisk 2.6 seconds and to 186 mph (300 kph) in 19.9 seconds. Porsche quoted the top speed at 217 mph (349 kph). All 918 Spyders combined a 4.6-liter V8 with electric motors at the front and rear axles to generate a total of 887 horsepower (652 kilowatts) and 944 pound-feet (1,280 Newton-meters) of torque.

We're curious to see how this 918 Spyder sells. At just 1,957 miles, the hypercar is practically new, and it's a somewhat early example as number 381 of the 918-example production run. Bidders also might be excited with the extra rarity from the only one with an unpainted body from the factory in the U.S. Mecum doesn't offer an auction estimate, but the listing says the original window sticker shows $931,975. We can't wait to see the price for this rare Porsche in lightly used condition.