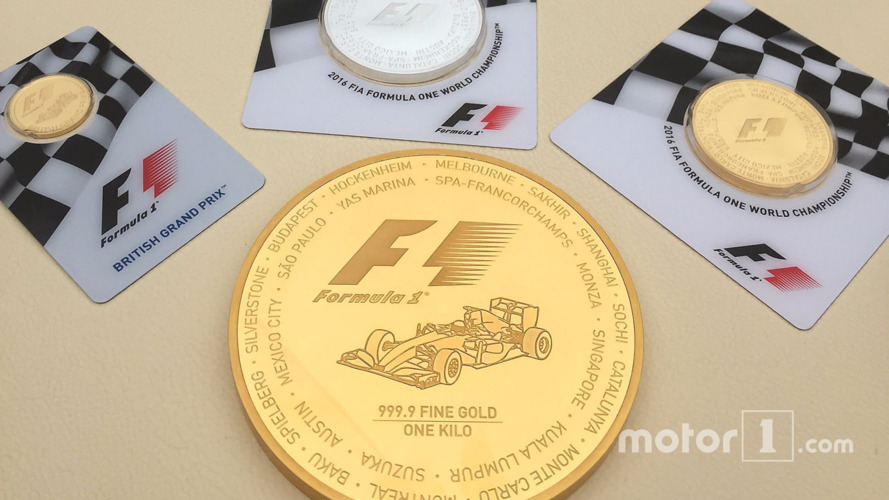 Formula 1 fans looking to spend their money can get their hands on the ultimate bit of sporting bling: a new limited-edition 1kg gold coin worth more than $40,000.

Precious metals dealer Rosland Capital has done a deal with Bernie Ecclestone to sell officially-branded F1 gold and silver coins, with their showpiece item being the 1kg coin made of 24 carat gold.

Only 15 of the coins will be made available, with one of them being showcased at this weekend's British Grand Prix.

Smaller coins – such as a British GP special-edition ¼ oz gold coin – have also been released which cost less than $1000. Other special editions will come for the Italian, United States, and Brazilian Grand Prix, with more races in 2017.

Rosland Capital CEO Marin Aleksov said: "We started selling these in the USA about three weeks ago, and there has been a fantastic response – they feel like they are buying a share in F1.

"A lot of people who had never seen races before phoned us back and told us they liked the concept – and wanted to know when the race was. It is creating a buzz."

Despite the high price tag of the 1kg coin, four were sold in the first week, and they are all expected to sell out soon.

The value of gold has shot up in recent weeks in the wake of the worldwide financial uncertainty caused by the British's public's decision to want to leave the EU.

The price of gold is at a three-year high against the pound.

Aleksov added: "The value has gone up 4-5 percent for sure since Brexit."