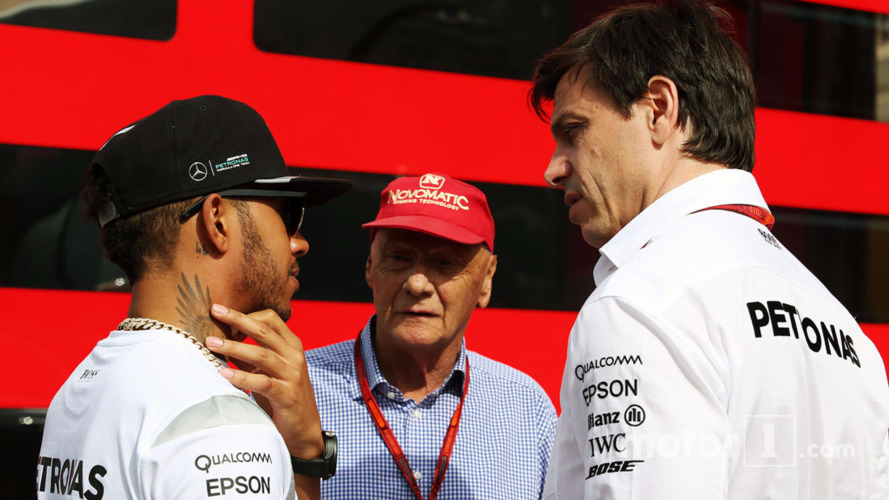 Yet another on-track clash between Lewis Hamilton and Nico Rosberg has left Mercedes in a Zugzwang. Don’t know what that is? Jonathan Noble explains.

Welcome to the 'Zugzwang' club Mercedes. In board games, and especially chess, Zugzwang is the point where a player has to move – even though whatever he does is going to be put him in a weaker position.

It is exactly the situation that Toto Wolff has found himself in; for when he calls together Mercedes' senior management and race engineers for that crunch meeting to pour over the fallout of the Austrian Grand Prix, the next move is going to be one that puts the team in a worse position than it is now.

Bring in team orders, it wrecks the image of Mercedes, is bad for F1 and will lead to wave after wave of criticism. Let the drivers carry on as they are, and the likelihood is of more trouble and lost results. Give the drivers one final warning and the risk is of being ignored and then facing criticism for not being strong enough. Break up the driver partnership and you lose all the positives that have come from a partnership that is on course to deliver its third consecutive title double.

And yet, what other options does Mercedes have right now? It has found itself in a dilemma caused entirely by its drivers proving they cannot race cleanly. Carrying on as things have been up until this moment simply cannot happen.

The impression from the outside is that Wolff feels betrayed by how the freedom given to Rosberg and Hamilton to race over the last two-and-a-half years has been throw back at his face.

He and the management should be applauded for allowing Hamilton/Rosberg to fight it out on even terms since the start of 2014. From pit calls, to tyre choices, to strategy decisions – at every step of the way the team has done everything it can to try to allow both drivers equal opportunities.

Mechanics were switched from sides of the garage to ensure that no camps were set up; and even in Austria last weekend it was noticeable that some of Hamilton's crew happily helped in the impressive rebuild of Rosberg's car after his final free practice crash.

In return for that equality, the one thing that was asked of both drivers was DO NOT TOUCH. Spa 2014 was the first flashpoint and the harsh way that Mercedes came down hard then – and in particular disciplined Rosberg – appeared to have nipped the situation in the bud.

A 30-race gap between Spa and Spain this year was deemed as acceptable as it could have been – as long as that was the last moment that the pair came together.

But with Wolff having made clear his disdain – and that a repeat would be deemed unacceptable – that Rosberg/Hamilton have done it again just four races later has left him deeply, deeply disappointed.

Having hoped beyond hope that the lost points of Barcelona would have acted as lesson enough for Wolff not to intervene too much then, perhaps the mistake was in trusting his men not to do it again.

Yes Austria may not have been a total wipeout like Spain where neither car finished, but there were still lost points as Rosberg fell down the order.

The team will be aware too that only a slight change of car trajectory from either of the Mercedes men could have resulted in both of them being hobbled – or even out on the spot.

That would then have left them with zero points; and opened the way for Red Bull to take a 1-3 with Max Verstappen and Daniel Ricciardo to close in by 40 points in the constructors' championship. Have that happen one or two times more and the title situation would get very tricky.

On those occasions Hamilton had been on the inside and eased his way out to the kerbs on the exit – as he is allowed to – to claim track position as Rosberg found himself needing to run wide to avoid a bigger incident.

To accuse Hamilton of deliberately running Rosberg off track on those occasions would be a step too far, but equally he did not do anything to avoid the prospect of it happening if his German team-mate had held his ground and turned in.

And it is those incidents – and the lack of sanction that Hamilton had from the stewards or the race team – that would clearly have played heavily on Rosberg's mind as he defended himself in to Turn 2.

For Mercedes' top staff, the feeling of being let down now needs to be wiped away and a tough call made on what exactly it does.

And there is no right path from here, no perfect answer and no solution that it wants to take. Whatever it does will be done with a heavy heart – for it knows it is in a Zugzwang.