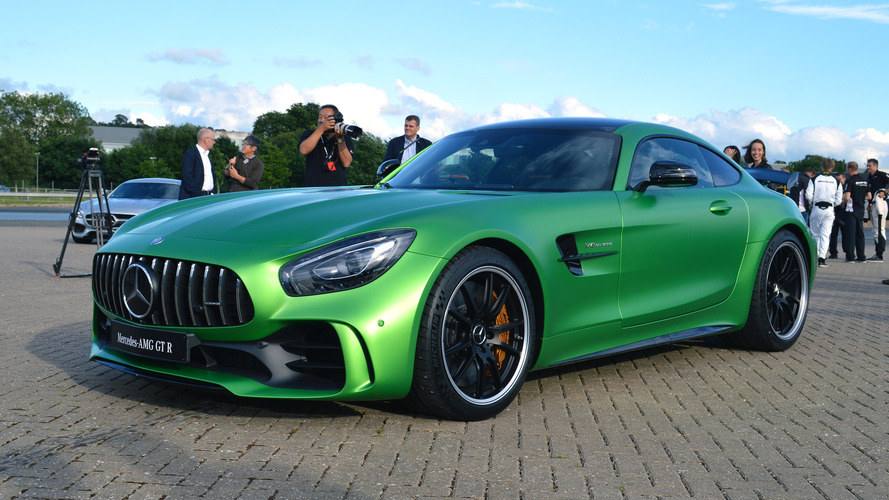 Mercedes was clearly looking to make a splash with the launch of it’s newest, and probably coolest AMG GT variant, the AMG GT R. Not only was the company willing to fly me from Detroit to London to see the global debut of this road-legal race car, but it also put on a hell of a show, invited a celebrity friend along, and made some news.

You’ve doubtlessly seen the official launch announcement of the 585-horsepower sex machine. The GT R (it’s going to take a while for me to get used to writing that in reference to a Mercedes) is incredibly impressive in person and on the spec sheet, with its glamorous paint job nearly as compelling as its all-wheel-steering tech, or its weight to power ratio of just 5.86 pounds per horsepower. But to hear Tobias Moers, head of Mercedes-AMG, tell it, the company is just getting started with the GT brand.

The executive announced today that the company is “further expanding our GT lineup … for road and track.” On the racing front, that means a GT4 version that will slot in below the GT3 car that obliterated the class at this year’s Nürburgring 24 Hours. With the early success of the GT3 program and the development of this R model, a lesser track-only version does seem like a natural next step.

What exactly the next “for the road” version could be, is less clear. There is some evidence that a roadster version of the car could be in the works… and that really feels like a car that should exist in the world.

If AMG were to bring out a convertible version of the GT – in regular tune or, less likely, in R trim – one celebrity is almost certain to end up behind its wheel: Forumla 1 champ Lewis Hamilton.

Mercedes made a really big deal about the GT R unveil today, flying the car out to the Brooklands test track by way of helicopter, before putting on some smokey demo laps with every member of the GT family. Then Hamilton showed up asking – as if by surprise – for a quick turn in the new sports car. The little skit setup with the driver for the launch was a touch on the cheesy side, of course, but it was fun to listen to Hamilton answer questions about the car later on.

The F1 pilot, who apparently had at least a passing word to say about the final development of the GT R, praised the looks of the new car. “I like the bodywork,” said Hamilton, “the wider tires; the wing at the back; it really sets it up.” In a preview of what the new AMG will be like to drive, he also remarked that the car is “quite stiff” and “has quite a lot of grip.”

Strangely enough, it took the debut of a six-figure near-supercar for me to learn that, according to the champ, his friends aren’t all that into cars. He told the scrum with a laugh that, “none of my friends can afford this car.” Apparently his crew – minus the celebs of course – are more likely to be driving EVs. Helps him stay humble, I don’t doubt.