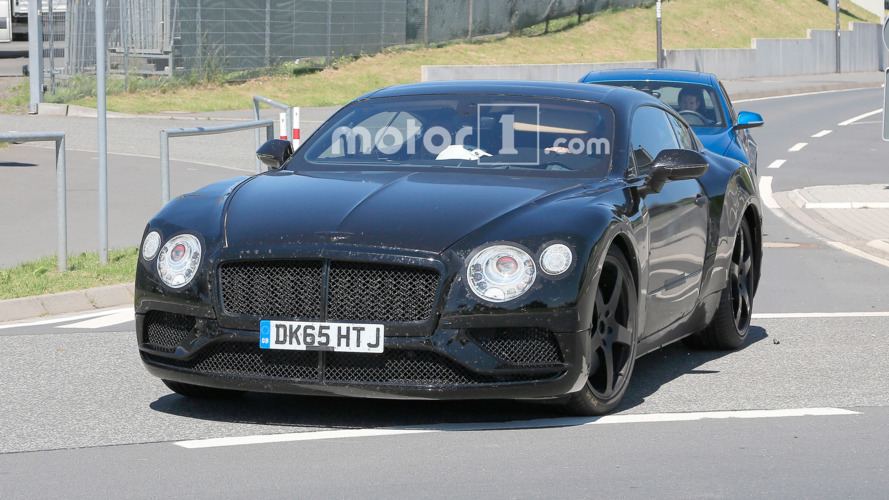 The company tapes on swollen fender covers to conceal the svelte shape underneath.

After doing some cold-weather testing in March, development of the next-gen Bentley Continental GT has moved to the Nürburgring. Body cladding camouflages the final design, but the engineers at the British luxury automaker can't hide that the new model is a sleeker evolution of the current coupe.

Bentley's EXP 10 Speed 6 concept won rave reviews at the 2015 Geneva Motor Show, and the company has incorporated some of the design cues into the new Continental, including the downward arch at the tip of the nose and swept back headlights. This one also wears big hunks of cladding around the fenders, which make the arches look cartoonishly large. Similar obfuscation around the trunk appears to artificially extend the coupe's length, too. However, the swooping roofline provides a hint about where the body might actually end. The rear bumper doesn't look final either, but we expect to see these oval tailpipes on the production version because they appear in several other batches of Continental spy photos.

The new Conti GT has a more svelte exterior appearance, and the sporty attitude shows up under the skin, too. A switch to Volkswagen Group's MSB platform reportedly sheds a significant amount of weight over the current rather portly model. The powertrain mix likely includes a 4.0-liter biturbo V8 and 6.0-liter biturbo W12. With fewer pounds to move around, these engines should provide respectable performance.

We expect the new Continental GT coupe to arrive in the second half of 2017. The already spied Conti GT convertible would likely join the lineup in 2018.