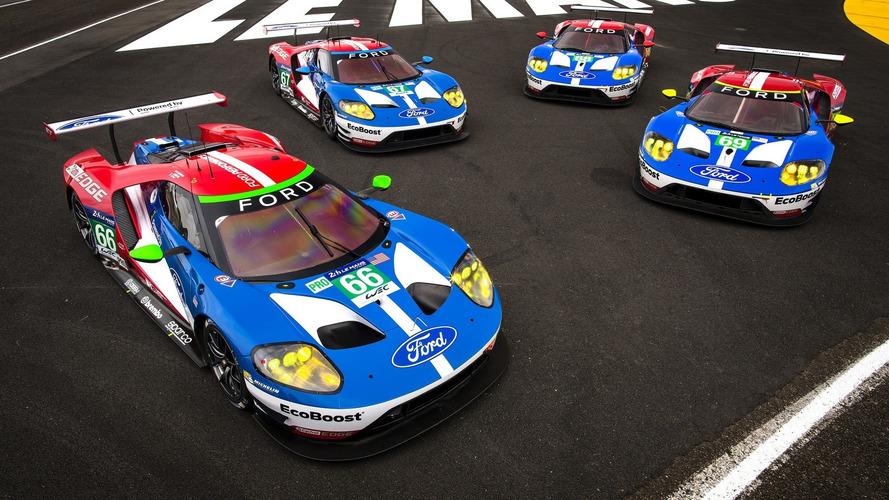 The Ford GT is at Goodwood these days to relax and unwind after claiming the win in its class last weekend at Le Mans.

Ford’s triumphant return to Le Mans is being celebrated this week at the Goodwood Festival of Speed where Ford Chip Ganassi Racing drivers Dirk Müller and Marino Franchitti are taking the #66 GT for a spin. Marino Franchitti is one of the drivers of the #68 Ford GT that took the win last weekend in the GTE Pro category half a decade after Ford scored a superb 1-2-3 win at the 1966 Le Mans. Last weekend, the #69 GT race car crossed the finish line last weekend in third place, while the #66 and #67 GTs finished fourth and ninth, respectively.

Swapping the famous Circuit de la Sarthe for the 1.16-mile hill climb course at Goodwood, the #66 GT race car is not all alone since it’s joined by a plethora of other Fords.

Ken Block’s Fiesta STRX43 from Gymkhana 8 is also on location and it’s arguably one of the most spectacular Fiestas ever built. With a massive 650 hp and 900 Nm of torque coming from a tuned 2.0-liter EcoBoost engine, the insane supermini rockets to 60 mph (96 kph) in a mere 1.8 seconds.

Another Ford that you can check out at Goodwood is the Mustang RTR that came to life primarily thanks to drifter Vaughn Gittin Jr. It’s one of the most powerful Mustangs out there, pushing out a massive 735 hp from its supercharged V8 engine. It also benefits from an adjustable suspension which brings a lowered ride height while the beefier body is a perfect match for the strong engine.

Other Fords at the festival include the newly introduced Mondeo ST-Line joining the already available Fiesta and Focus ST-Line models, along with the mighty F-150 Raptor which is being driven by none other than Ben Collins, Top Gear’s former Stig.

Representing Ford’s victorious team at the Le Mans 24 Hours race on June 18-19, the #66 Ford GT race car made its Goodwood Hillclimb debut driven by Ford Chip Ganassi Racing drivers Dirk Müller – one of the drivers of the class-winning #68 car – and Marino Franchitti.

The #68 Ford Chip Ganassi Racing Ford GT took 2016 Le Mans victory in the LM GTE Pro category exactly 50 years after Ford recorded an historic 1-2-3 victory at the iconic endurance race in 1966. The #69 Ford GT finished in third place, and the #66 and #67 Ford GTs finished in fourth and ninth places respectively.

“Last weekend the Ford GT made history again and won at the Le Mans 24 Hours race. It was an amazing statement about our passion for performance and innovation,” said Jim Farley, chairman and CEO of Ford of Europe. “This weekend, Goodwood will be the perfect venue for us to share our full Ford Performance line-up – from the new Fiesta ST200 all the way up to the Ford GT race car fresh from Le Mans – with so many people who share our passion.”

Visitors to the performance-themed Ford  stand at Goodwood will discover models including the acclaimed all-new Focus RS, which last year made its UK public debut at the Goodwood Festival of Speed; the Ford Mustangfastback and convertible; Focus ST; and the multi-award-winning Fiesta ST and new 200PS Fiesta ST200.

Also on show is the new Ford ST-Line range of Ford Performance-inspired models, including the Fiesta ST-Line, Focus ST-Line, and the new Mondeo ST-Line making its public debut.

The #68 Ford GT crossed the finish line at Le Mans at 15.00 on Sunday, June 19, as the overall GT winner after a titanic battle with the #82 Ferrari that rekindled a 50-year-old rivalry between the two car manufacturers. The #68 Ford GT took the lead for the final time in the 20th hour of the race.

The #66 Ford GT was in contention for a top result during the race’s infancy before suffering a small electrical problem, and returns to competitive action in the 2016 FIA World Endurance Championship at the 6 Hours of Nürburgring, Germany, on July 24.

The Ford GT race car is based on the new Ford GT supercar – the most advanced Ford production vehicle ever, featuring the latest in light-weighting, aerodynamics and EcoBoost engine technology, and an innovation showcase for the Ford brand.

The Ford Fiesta ST RX43 earlier this year starred as Block’s hero car in the eighth instalment of his Internet-based Gymkhana stunt driving video series that has received well over 300 million views combined.

Block’s Fiesta ST RX43 is designed to deliver rapid acceleration and can hit 60 mph from a standing start in 1.8 seconds using a highly-tuned 2.0-litre EcoBoost engine that produces 650PS and 900Nm of torque.

The Ford Mustang RTR (Ready to Rock) is the brainchild of World Champion drifter Vaughn Gittin Jr., and delivers 735PS from a supercharged V8 engine.

Driven up the Hillclimb course by racing driver and former “The Stig” Ben Collins, the all-new Ford F‑150 Raptor features a high-strength, military-grade, aluminium alloy body that makes it approximately a quarter of a tonne lighter than its predecessor.

At 10m high, the three-story Ford Performance stand offers one of the finest views of the Goodwood festival, which can be enjoyed using Ford’s Spectator Binoculars at locations across two floors.

Visitors can also experience The Leap, which challenges daredevils to throw themselves off a 4.5m airbag jump experience. A team of parkour athletes will be ascending an experts-only 9‑metre platform eight times a day to perform a series of choreographed stunt falls, spins, flips and somersaults.

Elsewhere on the stand, the popular Adrenalin Walk returns to give visitors a unique view of the #66 Le Mans Ford GT using a suspended glass floor to offer views from every angle above the race car.