Tech analysis: Why Mercedes was so dominant in Baku 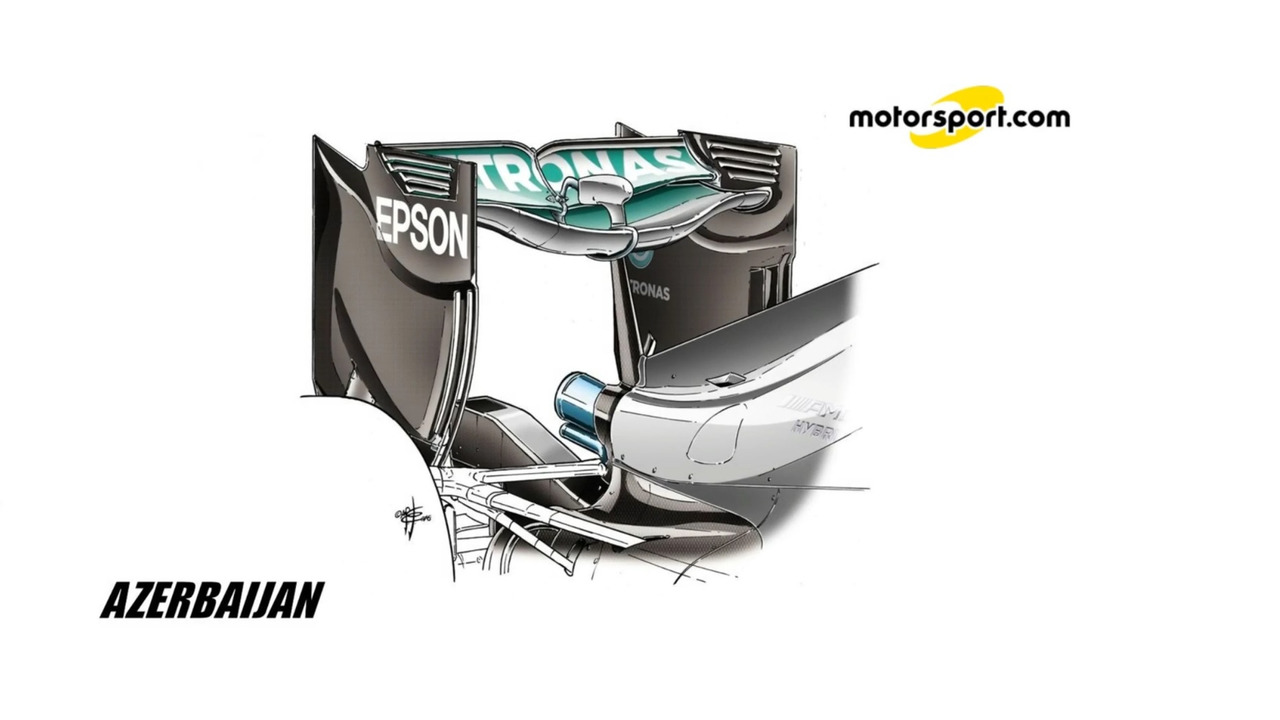 After Red Bull and Ferrari appeared to close in on Mercedes in recent races, the German squad was in a league of its own in the European Grand Prix. Giorgio Piola and Matt Somerfiled investigate the reasons.

By far the biggest take away from this weekend's action was that Mercedes and the rest of the Mercedes-powered teams still have an advantage over the rest of the field at circuits that demand the absolute most from the power unit.

However, that isn't the story in its entirety with Nico Rosberg able to extract the maximum from his W07 and finish a whopping 16.696 seconds up the road from his closest rival, Sebastian Vettel.

It pays to be prepared

The Baku street circuit posed some interesting challenges for both the drivers and engineers, not only from a track configuration point of view but also from a metrological point of view with wind speed/direction and temperatures all playing a significant role in the set-up of the cars.

As we know Pirelli's tyres are hugely susceptible to temperature changes, with each compound designated its own operating window, which has an impact on both their performance and degradation.

The cameras are now fitted with a highly modified 5 gigahertz WiFi system (roughly three times faster than the standard protocol – around 1500 megabits/second), with the data transfer initiated as soon as the driver enters the pitlane, rather than having to stop the car, unbolt bodywork and plug it in for download.

This has further benefits in that it allows the car to be out on track for much longer periods of time as the data dump takes significantly less time to achieve, allowing the team to maximise set-up and do familiarisation work.

Whilst you could argue that all teams have been using thermal imaging cameras for some time now, with most mounting at least one rearward facing camera on the front wing (including Mercedes), the sheer amount of data that is being captured by the cameras used by Mercedes in free practice cannot be handled by the standard telemetry system and must be relayed separately.

It's strange then that given the tyres sensitivity to temperature and set-up that we haven't seen other teams employ a similar ethos during free practice sessions.

Either they deem it unnecessary or lack the technical partnerships at this time to achieve the same result. However, it is clearer – now more than ever, with the introduction of the third tyre compound this season, that tyre performance can provide a huge differential.

Of all of the teams it is Mercedes' relentless pursuit of excellence that has cast the longest shadow so far this season. With updates at every GP so far this season, be it small or large, it has managed the gap to its opposition with only a few exceptions.

To use an analogy, its aero development is like the best written TV shows: the ones that have writers who know how to balance the season-long story arcs with those in each episode.

The 'spoon' rear wing is a prime example of Mercedes being able to act out several story arcs, whilst others are more ponderous in their delivery.

The spoon rear wing used in Baku was actually tested by Rosberg in FP1 in Montreal, a clear sign of a team thinking ahead, able to correlate the result of that test with data they had on Baku ahead of time.

Mercedes seemingly found the aero sweet spot pretty early on with the W07, having elected to run the new rear wing, albeit without the hooped monkey seat that was used with it in Montreal.

The spoon wing is not new and, whilst Mercedes used it last year, it is the development of a concept we have seen others use in the past. However, what it does do is provide a good balance between downforce generation and drag reduction, something that others hadn't had the foresight to develop.

Instead, the likes of Ferrari and Red Bull were trimmed out with rear wings featuring load levels between what I'd expect to see in Spa and Monza.

The issue with this is that at a circuit like Baku you have both ends of the spectrum: slow twiddly corners that require downforce and long high speed straights that want minimal drag, which consequently affects tyre performance too.

For instance, Ferrari quickly found that a new specification of front wing it had arrived in Baku with wasn't putting enough load through the front tyres in the middle sector, compromising the overall laptime and forced it to switch to the previous specification.

Meanwhile, Red Bull, which was struggling with a power unit deficit, opted to run a very low downforce rear wing, like Ferrari.

In the case of Ricciardo though it improvised, cutting the front wing's top flap to try to change the balance and reduce drag further (The green overlay in the image above shows what the wing would ordinarily look like).

Whilst this gave the Australian the platform to challenge over the course of one lap, it appears that over a race distance it compromised the set-up and forced the team to change tyre strategies as he struggled to maintain the right tyre temperatures.

Even when Mercedes had issues, it has adapted to improve on its deficiencies.

The prime example of this is its relentless pursuit of an issue that Rosberg encountered in Australia, whereby a piece of debris lodged in the front brake duct's mesh ramped up brake temperatures.

This, even with Rosberg's seemingly unassailable lead, almost led to his retirement and forced him to adjust his driving style to manage the issue.

In the following race, the team placed debris of its own on the brake ducts mesh in order to simulate the scenario and then set about making changes to the inlet in order to counter another issue surfacing.

Like many of the top teams, it is able to 3D print some parts at the circuit, with designs sent direct from the factory, which enables it to cut out the offending part and stitch the new one in.

There has been a huge amount of work go on since then to rectify this, with a change made at every GP until Canada when it ran the same specification used in Spain.

Whilst Rosberg scampered off into the distance, a poor qualifying session from Hamilton that saw him destroy his front suspension meant he had a challenge on his hands to recover through the field.

Unfortunately, that recovery was hampered by a mapping error which affected Rosberg too, albeit the German was able to rectify it post-haste.

The issue that befell both Mercedes-powered drivers is what is referred to by Mercedes as 'derating', a process whereby the ERS will not deploy more energy than it is able to recover on average over the course of a lap.

For the driver it is the equivalent of putting the handbrake on, as the acceleration suddenly tails off when it feels as if the car's speed should continue to climb.

This clearly has an impact on the driver's mindset, as it changes the braking points too. The car is unable to reach its VMax on the main straight, which further compromises things when we consider its impact on brake and tyre temperatures.

Whilst one Mercedes-powered driver suffered at the expense of his machinery, another shone through. The Mercedes-powered Force India car has been in resplendent form, with the team able to maximise the upgrade package that it took to Barcelona (above).

The new front wing (above) is one of the primary reasons for this upswing in performance, with Perez already vocal about how the team had suffered before its introduction, as it had to trade tyre performance and set-up owing to its aero inefficiencies.

With this stumbling block overcome, it wasn't long before we saw the emergence of Perez's unique ability to look after the tyres whilst extracting performance to hold off drivers with questionably better machinery.

Whilst Force India doesn't necessarily have the budget to make all consuming changes at each GP, it does have a canny ability to maximise what it has. However, in Baku the team did make limited changes to its bodywork in an effort to improve its cooling capacity.

As we can see in the image above, a larger ERS cooler was mounted behind the power unit which, rather than bloating the entire engine cover and compromising both internal and external airflow, a blister was created around it.

Furthermore, rather than have a specific low downforce rear wing, the team decided to trial various configurations to find the best solution under all conditions and use the ERS deployment in a different way to overcome any additional drag it might have on the straights.