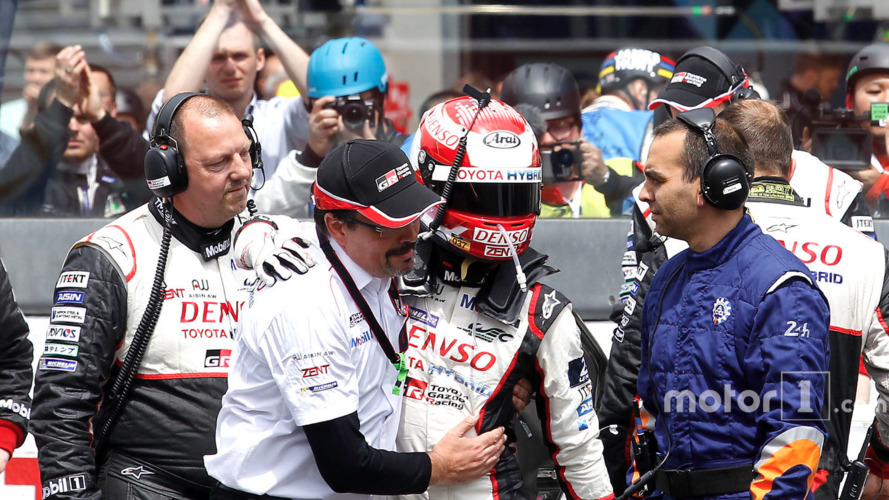 That Toyota went into Le Mans as the underdog yet pulled out all the stops for what should've been a deserved first win makes that last lap so much more painful, writes Sam Smith.

Once the shock of seeing Kazuki Nakajima stationary on the pit straight last Sunday afternoon subsided, it wasn’t so much the wanton cruelty of the situation that made the collective sympathy from the crowd audible from opposite Toyota’s pit.

It was more the realisation that yet again the Japanese manufacturer was going to be denied a likely victory at Le Mans; just like 1994, just like 1998, maybe 1999, and most definitely 2014.

History was ultimately harsh again to Toyota, yet the cornerstones of the marque springing a surprise this year were such that a genuine challenge for the 2016 WEC crown should be capable.

The 14-lap fuelling strategy that caught its rivals unawares, converting some luck amid the slow zone procedures during the race, consistently triple-stinting tyres and, Kamui Kobayashi’s contact and spin apart, error-free stints from a roster of drivers set up what looked to be the breakthrough Toyota win.

Yet, one of the real key reasons Toyota were so impressive was the simple fact that it had a better efficient, low-drag package than its rivals.

This gave it excellent straightline speed, mixed with the deployment of its new-for-2016 8MJ boost out of Tertre Rouge; it ensured a two-tenths advantage in sector two over the fastest overall stints.

The efficiency of the low-drag Toyota aero solution was also remarkably easy on its Michelins, as it did 42 laps (triple stints) per set of Michelins throughout.

The makings of an upset

The fact Toyota emerged as the all-round quickest and most reliable of the three manufacturers is doubly astounding when you consider that it wasn’t until last July when the real work started on the TS 050 HYBRID and its brand new concept of a V6 2.4-litre turbo engine. The new concept didn’t run on the dyno until the autumn.

Toyota was always going to change from the supercapacitor to battery storage this season, but with the reduction in fuel allowance for 2016, it knew direct injection had to be part of the package this season. Another key factor was what Pascal Vasselon described to Motorsport.com as “overall better packaging, exhaust pressure and better weight as it (the engine) is stressed.”

One of the biggest concerns Toyota had was making the 875kgs weight limit with the larger hybrid system in the car, but the Toyota team headed by TMG’s project leader John Litjens, delivered a nicely packaged LMP1 car.

The TS 050 HYBRID wasn’t initially tested in its full new guise until February. Before it, came an interim package with a TS 040 rear end which conducted initial runs last December and January. Yet it was only four months ago the pukka 2016 model started its development.

It is a remarkable testimony to both the Higashi-Fuji technical centre in Japan and the TMG headquarters in Cologne that everything came together and almost took victory at the first time of asking.

Thinking back, the positive signs were there from the very first public viewing at Paul Ricard. On several occasions, Sebastien Buemi lit up the timing screens vivid purple in the first two sectors but would then pit.

Toyota needed to keep its powder dry on several fronts and it achieved its aims, with very few observers featuring the TS 050 HYBRID on its favourites' list for the 2016 edition of Le Mans. In short, Toyota was back in the game, but it was back as a stealthy presence only - until the race, that is.

Many will forget too that Toyota ran the most laps in the practice and qualifying sessions at Le Mans last week when conditions were at their most moist.

The start of the race saw the #6 car driven by an inspired Mike Conway leave the rest behind by upwards of four seconds a lap at stages. So, Toyota prepared well and capitalised on learning as much as possible about its car in the inclement conditions, knowing that at least some of the race would bring similar degrees of wet running.

Anthony Davidson’s early-morning stints set up strong pillars of the #5 Toyota’s challenge. When Buemi took over later in the morning, just before 8am, the #5 slipped past the #6 and in to the lead for the first time.

From there it largely controlled the pace until Nakajima climbed aboard at 1.30pm for the final run-in, which became more comfortable after Jani’s late stop for fuel and tyres

With now 85 seconds in hand, the #5 had to just tick off the final few laps. But the penultimate time around, Nakajima started to lose power.

The loss of points for the non-classification was merely a large grinder of salt twisted in to an excruciating wound.

But, the real pain will come this week when Pascal Vasselon and his team of engineers analyse not only the issue which denied them the glory, but also how much they had deserved to become the ‘immortals of Japan’ and deliver the first ever Le Mans win after 31 years of trying. They had it bought and paid for, but lost the receipt on the way out.

Toyota did everything right. It had winning pace, a demon strategy which caught its competitors and most commentators off-guard. The blemish-free canvas on which the marque had painted a victory masterpiece was just drying off and waiting proudly to be hung for the world to see.