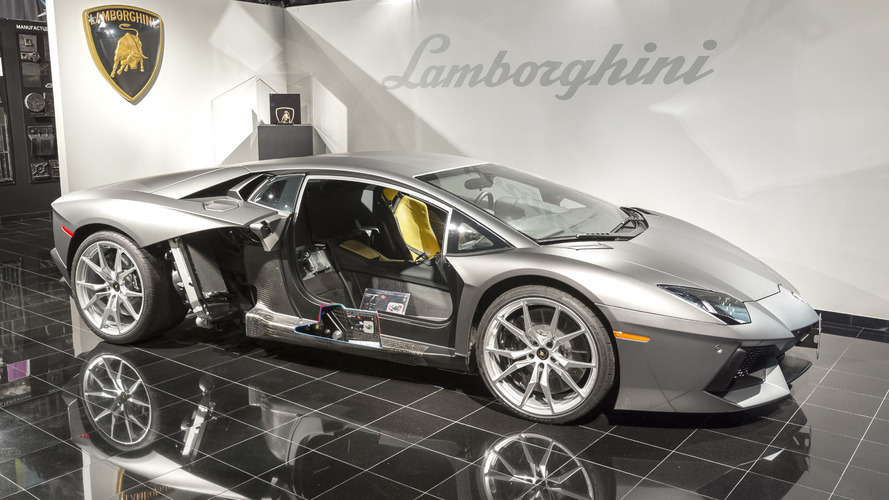 The lab's walls show how quickly the material is progressing.

Lamborghini has an inextricable link to Italy, but look for the company’s future innovations in carbon fiber technology to come from Seattle, Washington, at its Advanced Composite Structures Laboratory’s newly opened research center. The solutions in development there could make Lambo’s next-generation supercars even lighter and quicker.

The Countach Quattrovalvole was the first production Lamborghini to use carbon fiber components, and the Italian supercar maker has come a long way since then. For example, ACSL created the company’s patented Forged Composite, which made the lightweight material easier to sculpt for structural parts. It premiered on the Sesto Elemento and helped the coupe tip the scales at a mere 2,202 pounds.

ACSL's new center will also continue Lamborghini’s collaboration with Boeing to improve carbon fiber. We'll be very curious to see what will come next from them because the companies' innovations were vital in the development of material for the Aventador’s lightweight monocoque.

Beyond Lambo's lab, Washington is a hotbed of carbon fiber development. BMW operates the Moses Lake factory in the state, and the site produces the lightweight material for the i3, i8, and other models. The plant is such a success that BMW keeps expanding it to keep up with demand. Like the Italian supercar maker, the German firm also collaborates with Boeing to create new innovations in lightweighting.

Operating as an entity outside of the company's headquarters in Sant'Agata Bolognese, the ACSL is responsible for unlocking new potential in carbon fiber. The breakthroughs that take place here go on to influence developments in Lamborghinis of the future. The official grand opening of the new ACSL also marks the 30th anniversary of Lamborghini's use of carbon fiber reinforced polymer in its vehicles.

"Carbon fiber is a material that Lamborghini has a long history with. Starting with the Countach Quattrovalvole and continuing today, it is one of the most important keys to the success of our cars in the past, present and future," said Stefano Domenicali, Automobili Lamborghini Chief Executive Officer.

Seattle is a strategic location for the ACSL, particularly because of its collaboration with Boeing in working toward carbon fiber innovations that are beneficial in both automotive and aerospace applications.

"Seattle is a nexus for innovation and Lamborghini's choice to base its carbon fiber research center here reflects that," Washington State Gov. Jay Inslee said, "Lamborghini's Advanced Composite Structures Laboratory, their continued success in developing breakthrough technology, and their collaboration with Boeing is a benefit and a point of pride for the city and the state of Washington."

Forged Composite® is one of the most important developments to come from research within the ACSL which shortens the amount of production time required to form components by comparison the traditional labor techniques.

The technology made its debut in 2010 with the Sesto Elemento limited series supercar where it served in a structural capacity and as proof of how capable the rapid-formed material is. Such continued refinements in the manufacturing process have allowed Lamborghini to enhance its finished product for structural and aesthetical application in 2013.

"By continuing to develop our patented Forged Composite materials, we are able to create a product that can enhance Lamborghini super sports cars in both their performance and their appearance," said Maurizio Reggiani, Board Member, R&D. "The ability to leverage this kind of lightweight material gives Lamborghini an advantage that will benefit our cars – as well as production process - in the future."

Lamborghini's dedication to leading the industry in carbon fiber innovation goes beyond material development through the ACSL to find and recruit young, talented engineers from around the world.

Lamborghini debuted the latest car to showcase its mastery of carbon fiber during the 2016 Geneva Motor Show. The Centenario, which was on display for the exclusive event, is available in a body made of fully exposed carbon fiber.

Meant to mark what would have been company founder Ferruccio Lamborghini's 100th birthday, the Centenario is a marriage between acknowledgements of past milestones and technological "firsts." Appropriately, it is only available in a very limited production run of 20 coupes and 20 Roadsters.