Audi has "homework" to do after "horrible" Le Mans showing 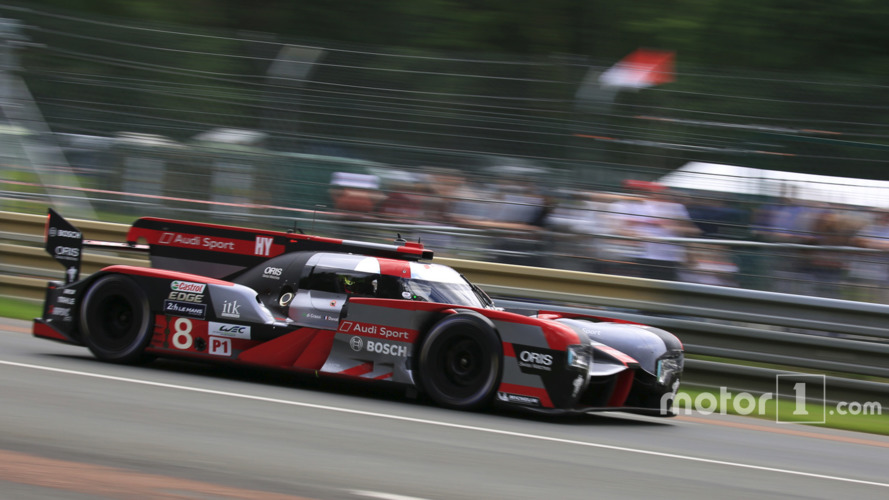 Lucas di Grassi says his Audi team has "homework" to do in order to mount a fresh challenge for victory at Le Mans after what he described as a "horrible" showing by the German manufacturer.

Audi placed third and fourth with its pair of R18 e-tron quattro cars, marking its second successive defeat in the La Sarthe race to VW Group sister brand Porsche and only its fourth since 2000.

The Ingolstadt marque had been set to finish off the overall podium for the first time since 1998 before the last-lap failure of the race-leading #5 Toyota promoted the #8 entry of Lucas di Grassi, Loic Duval and Oliver Jarvis to the bottom step of the podium.

Speaking afterwards, di Grassi said he was surprised to learn that he had finished on the podium, and wasn't afraid to voice his opinion about Audi's lacklustre showing, which included numerous trips to the garage for time-consuming repairs by both cars.

"I didn't know I was on the podium until somebody called me," said the Brazilian. "I did a whole lap thinking I was fourth. My engineer told me, 'OK, you finished fourth.'

"Then when I stopped, the guy said 'you're on the podium'. I said 'no I'm not, I want to walk back to the garage.' Then he said 'podium, come with me' – and I realised that I was on the podium!"

He added: "[Coming third] is great after the horrible race Audi had in general, with how many times we went into the garage, how many repairs we had to do and how much time we spent stopped.

"To finish on the podium of course is a nice reward, but this race is not [like] Audi. We have to beat them on the track. We only had the pace to do it a few times, and we made too many repairs.

"We have to improve a lot to come back, to be stronger – as Toyota improved last year. Also consider that [Porsche's] leading car [the #1] also had trouble.

"So we have a lot of homework to do after this race," he concluded.

Duval echoed the sentiments of di Grassi, conceding that as well as the technical problems that hobbled the team, Audi simply wasn't fast enough to take on Porsche and Toyota.

"There are plenty of things that didn't work correctly," said the Frenchman, "not least of all our performance. We lacked pace and we didn't think this would be the case.

"We had too many technical problems, we were not on the level of our competition. We must quickly rectify this, because we don't come here just to finish on the podium."

Gallery: Audi has "homework" to do