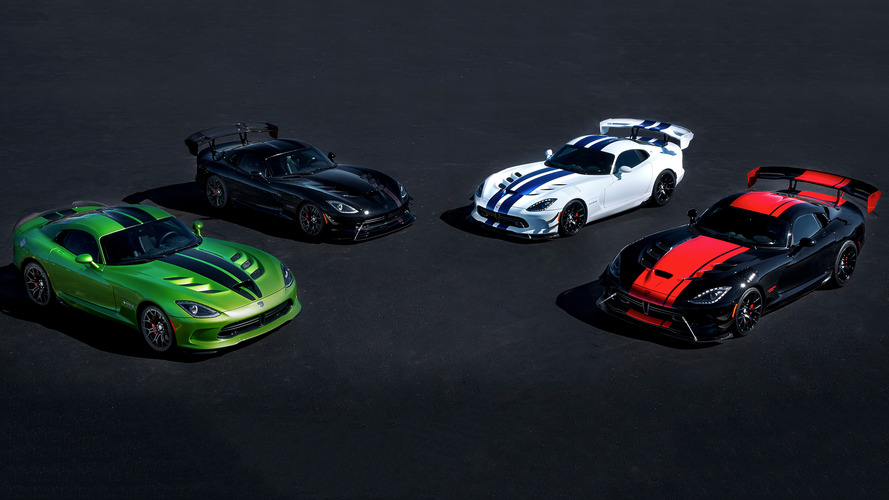 Celebrating the car’s 25th anniversary and last year of production.

To mark the fact that 2017 is the final year and the 25th anniversary of the Viper, Dodge is launching five limited-edition versions of the famous sports car. Customers can order the special Vipers starting this Friday, June 24.

The first version is the 2017 Dodge Viper 1:28 Edition ACR, which is named for the 1:28.65 record lap time that a Viper set at Mazda Raceway Laguna Seca. The Viper ACR gets dressed up in a red-and-black theme with the car’s optional Extreme Aero and package and carbon-ceramic brakes, plus various 1:28 Edition badges. Production will be limited to “as many as” 28 copies. The naming convention follows in the footsteps of 2010’s Viper ACR 1:33 Edition, named because that car set a 1:33.915 lap at MRLS.

There’s also a Viper GTS-R Commemorative Edition ACR that pays tribute to the white-and-blue color scheme of the 1998 Viper GTS-R GT2 Championship Edition. It’s painted Pearl White with blue stripes, and comes with the ACR’s Extreme Aero and Extreme Carbon packages, carbon-ceramic brakes, red seat belts, red Stryker badges, and a car cover customized with the owner’s name. Up to 100 will be offered.

Two of the other special-edition models are styled to look like historical Vipers. The VooDoo II Edition ACR is black with red accenting, in an homage to the 2010 Viper VooDoo; sales are limited to 31 cars. The Viper Snakeskin Edition GTC, meanwhile, comes in Snakeskin Green paint to match the car of the same name sold in 2010.

The final version of the 2017 Dodge Viper is the Dealer Edition ACR. It’ll be sold only through the nation’s top-selling Viper dealers – Tomball Dodge in Texas and Roanoke Dodge in Illinois ­– and will be painted white with a blue center stripe, a red driver stripe, and red interior accents. A total of 33 units will be made available.

Regardless of which version you pick, there’s only one powertrain choice on offer for the 2017 Dodge Viper: An 8.4-liter V10 rated for 645 horsepower, with a six-speed manual transmission.

Dodge will discontinue the Viper after the 2017 model year; reports suggest that, in part, that’s due to a lack of side-curtain airbags that will be required for 2018.

The Dodge brand is celebrating the 25th anniversary of the Dodge Viper with five limited-edition models that commemorate the final year of Viper production and highlight several of the most iconic special edition Vipers of the past.

“The Dodge Viper has had a great run, and 25 years after it was first introduced, it leaves the supercar world reaching for the records it continues to set,” said Tim Kuniskis, Head of Passenger Cars, Dodge, SRT, Chrysler, and Fiat – FCA, North America. “With more track records than any production car in the world, the Dodge Viper ACR will live on as the fastest street-legal Viper track car ever, the car that has set the benchmark for all that follows in its tracks.”

One of the most unique and exotic high-performance machines on the road today, Dodge is honoring the Viper’s rich, colorful and exceptional performance heritage on and off the track by paying tribute to some of the most iconic Vipers in its history. Beginning on June 24 and new for 2017 model year, customers can order their special snake in the following exclusive special edition configurations:

Industry-first ‘1 of 1’ Viper customization program continues
Continuing for the 2017 model year is the exclusive Viper “1 of 1” customization program that enables buyers to create their one-of-a-kind “Snake” from the ground up. With 16,000 exterior color options, including matte exterior finishes, 24,000 custom stripe colors, 11 wheel options, 16 interior trims and seven aero packages, three brake packages and four suspension options, there are more than 50 million ways for buyers to customize their one-of-a-kind Dodge Viper. Each “1 of 1” model Viper features a personalized instrument panel badge with customer’s chosen name to commemorate their exclusive design. No two customers can order the same configuration, including color, in the same model year

ACR model returns as ultimate street-legal racer
The Dodge Viper ACR returns in 2017 as the indisputable “ultimate street-legal race car” with significant aerodynamic and suspension upgrades. Relaunched in 2016, the third edition (1999-2002, 2008-2010) of the Viper ACR has taken the performance car world by storm with more track records than any production car in the world — a total of 13 road course lap records as certified by the Sports Car Club of America.

About Viper
All 2017 Dodge Vipers are powered by the iconic all-aluminum 8.4-liter V-10 engine that delivers 645 horsepower and 600 lb.-ft. of torque — the most torque of any naturally aspirated sports car engine in the world.  Standard safety features include electronic multistage stability control, traction control and a new four-channel anti-lock brake system.