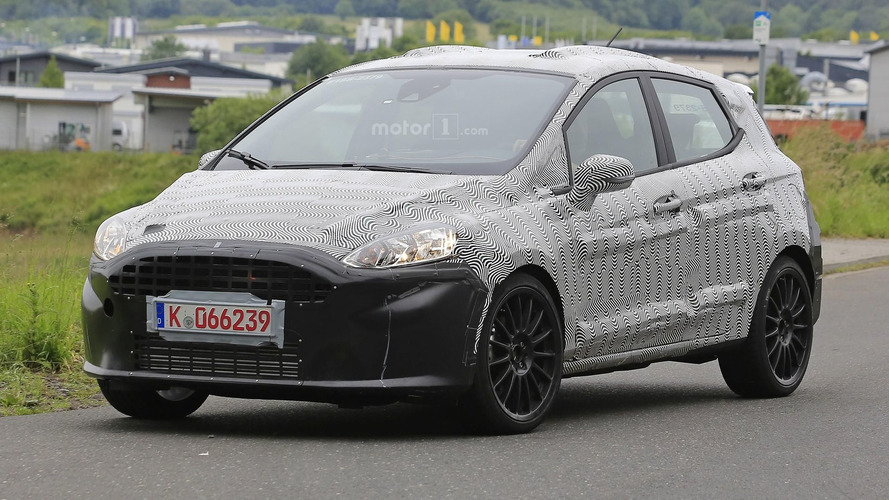 It was only just a few hours ago when we shared a speculative render of the next-gen Ford Fiesta and now we have a batch of spy shots with a prototype of the ST. Even though it’s covered in swirly camouflage, you can easily see we are dealing with a hotter version of the supermini by looking at its more aggressive front fascia and dual exhaust tips. It rides on chunkier wheels shod in low-profile tires and also appears to have a stiffer suspension setup denoting it’s the go-faster edition.

In spy images of the regular 2017 Fiesta we noticed the prototype was wider and longer than the outgoing model. That’s obviously going to be the case with its ST sibling which is visibly bigger in the adjacent spy images. We just hope the increased footprint won’t come with a weight penalty. If it will, the folks from Ford better squeeze more power from the turbocharged 1.6-liter EcoBoost engine to match the fatter body. Right now, the beefiest Fiesta is the ST200 which as the name implies has 200 PS (197 horsepower) on tap.

It’s too late in the game for the current sixth-gen Fiesta to spawn an RS version, but maybe Ford will decide to go all out with the next one and create a more hardcore edition. Ford did promise towards the end of 2014 to launch more than 12 performance vehicles by the end of the decade, so it would make sense for the Fiesta to be one of them.

With the regular model expected to see the light of day in the first half of 2017, the meatier ST will probably arrive late the same year or early 2018.