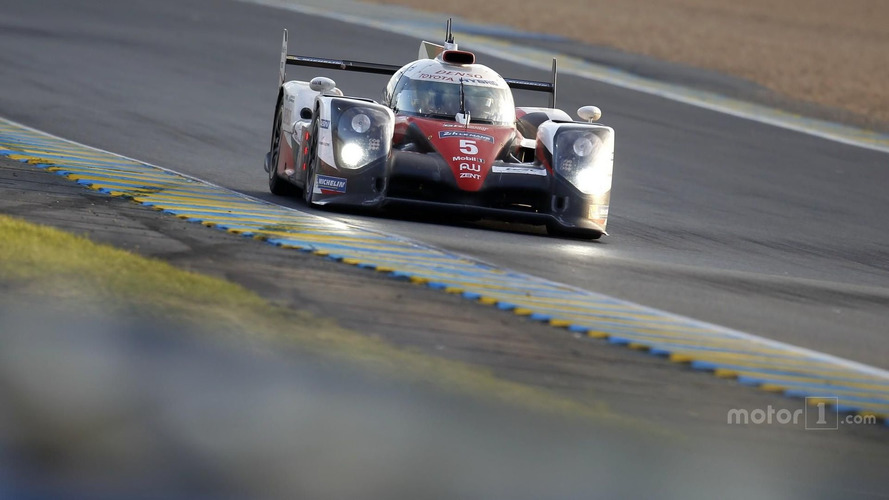 One of the closest battles in recent Le Mans history continued to rage during the late morning hours, as Porsche sustained its efforts to deny Toyota a much-craved first win at La Sarthe.

Anthony Davidson took the lead from Marc Lieb just before 11am after some absorbing racing between the pair entertained the massive crowd.

The shape of the fight shifted just after 8am, when Sebastien Buemi, driving the #5 Toyota TS 050 Hybrid, put a move on the Mike Conway-driven #6 car, which had led for much of the race.

The safety car/slow zone strewn-hour between 7 and 8am had teed-up the remarkable sight of a three-way battle for the lead, as the #2 Porsche driven by Neel Jani caught the pair of Toyotas.

However, Buemi got the hammer down and was able to open up a gap of around 20 seconds as the race went in to its 20th hour, before pitting to hand over to Anthony Davidson.

The scrap for second place between the #2 and #6 intensified at 10am as Marc Lieb and Conway jousted on track, slicing through traffic as if it were the final stint in a six-hour race.

The on-track battle was halted when Conway pitted, but with the ebb and flow eddying throughout the stops, the battle was certain to recommence in the final push for the chequered flag.

Porsche took the bol but necessary decision to triple-stint the Michelin tyres for the first time at 10.15am, with Marc Lieb re-emerging back out in to the lead.

That put him three to four seconds ahead of the Toyotas of Davidson and Kobayashi, but just before 11am Davidson caught Lieb and slipstreamed the 919 Hybrid down the Mulsanne, claiming the lead.

The #8 Audi continued to plough a lonely furrow in fourth position, 1.5 laps adrift of the raging three-way battle at the front. But its progress was halted just before 11am when it was pushed back in to its garage for repairs.

The walking wounded #7 Audi and #1 Porsche continued in fifth and sixth in the LMP1 class, as they pushed to claim precious points to rejuvenate their FIA WEC title chances.

Rebellion Racing retired the #13 car after it stopped on the circuit with Mattheo Tuscher aboard the R-One-AER. This left the #12 example home alone in the LMP1 privateer class albeit much delayed after electrical problems.

The flow of the LMP2 category continued to be turbulent as several key protagonists fell by the way wayside in the early morning hours.

The most significant was the #46 Thiriet by TDS Oreca, which led the class for chunks of the first 16 hours. Pierre Thiriet shunted the car while in second position and the French team was forced to retire shortly after as a result of the damaged sustained.

It was more heartbreak for the team which narrowly missed out on victory in both 2012 and 2014.

The #36 Signatech Alpine continued to lead the #26 G-Drive Racing entry by just over a lap, but the Rene Rast-driven Oreca-Nissan capitalised on a slow driver-change (from Richelmi to Menezes) for the French team just after 8.30am.

Rast’s marathon and blistering stint at the wheel of the #26 came to an end just before 10am, the German having relentlessly pursued the leader since 5am and set the class's fastest lap.

Will Stevens took over the cockpit and at 11am, with four hours remaining the ex-F1 driver was a lap in arrears of the #36 Signatech Alpine.

After many of the original LMP2 podium contenders crashed out, the final rung of a the podium was up for grabs and contested by the #37 SMP BR01 and the #42 Strakka Gibson.

Jonny Kane managed to annex the position before it slipped back to fourth when Nick Leventis climbed aboard in the 19th hour.

Ford back in command of GTE

At 10.30am, Joey Hand caught Matteo Mallucelli and put what could prove to be a decisive move on the Italian Le Mans rookie in to the fist Mulsanne Chicane.

Earlier attempts to grab track position had been thwarted by slow zones, safety cars and pitstops, so Hand immediately knuckled down to stretch the gap to three seconds as the clock ticked to 11am.

Ford still maintained two of the three podium positions as the #69 car with Ryan Briscoe aboard was the only other car to run on the lead lap.

Townsend Bell continued to put in a class-defining performance as he stretched the Scuderia Cora Ferrari’s hard-earned advantage in GTE Am.