Toyota vs. Porsche battle heats up, Corvette crashes out 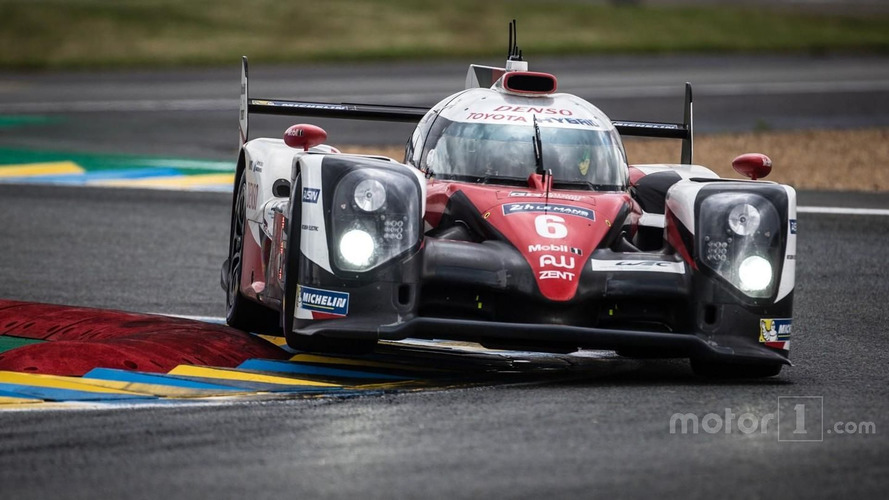 Stephane Sarrazin is leading a Toyota 1-2 ahead of Neel Jani’s Porsche, while Tommy Milner crashes the #64 Corvette out of GTE Pro.

Stephane Sarrazin headed Toyota TS050 teammate Kazuki Nakajima after 16 hours of competition, but the Porsche 919 currently driven by Neel Jani appears able to match the Japanese cars punch for punch and currently lies 22sec off the lead and just 9sec from the second Toyota.

Audis #8 and #7 run fourth and fifth but they are 2 and 12 laps behind respectively, with Loic Duval and Marcel Fassler currently at the wheel.

With the demise of the #13 Rebellion Racing entry, it’s actually the second Porsche of Timo Bernhard that is sixth in class, although it is 38 laps down.

This looks set to be an Alpine/Oreca walkover but who will prevail? Right now, the Monaco-born Stephane Richelmi is leading in the Signatech Alpine-Nissan after a brilliant stint by his teammate Nicolas Lapierre. His advantage is a minute over Pierre Thiriet in TDS Racing’s Oreca Nissan, with G-Drive’s ever-reliable Rene Rast in third.

Sadly the fourth place G-Drive car, the Gibson chassis, understeered into the wall on the pitstraight, while running fourth, handing this spot to SMP Racing’s BR01 Nissan. Also in trouble just past the top of the hour was the ByKolles CLM which is sitting smoking, trackside.

The Risi Competizione Ferrari has maintained its pace advantage over the Ford GTs, with Toni Vilander and Giancarlo Fisichella setting strong and consistent 3min53sec-laps to edge away from Sebastien Bourdais in the #68 Ford, which currently lies just under 20sec in arrears.

Scott Dixon is third in the #69 Ford while Nicky Thiim in the #95 Aston Martin Vantage is ahead of a third Ford GT, the #66 car currently piloted by the redoubtable Olivier Pla.

After the embarrassing exits by Team Manthey works Porsches, Dempsey Proton Racing is waving the banner for Stuttgart with Philipp Eng in sixth, ahead of the #97 Aston Martin and the sole remaining Corvette, the #63 now driven by Jan Magnussen.

Sadly the #64 ’Vette crashed out just past the pits at the end of the 15th hour, as Tommy Milner’s car went light over a bump, knocking him onto the grass at the Esses and sending him plowing into the end of a tire wall. The American got out unaided but sorrowful.

It was a thrilling battle … until Townsend Bell took the wheel of the #62 Scuderia Corsa Ferrari just as the team’s chief opposition – the Proton Porsche #88 – was taken over by gentleman driver Khaled Al Qubaisi.

Bell remorsely built a huge lead, and since then Jeff Segal has maintained that pace and kept the margin over Pat Long who took over the #88 and who has now handed over to David Heinemeier Hansson.

Behind them, the AF Corse Ferrari of Emmanuel Collard is third and on the same lap, ahead of Clearwater Racing’s similar car.