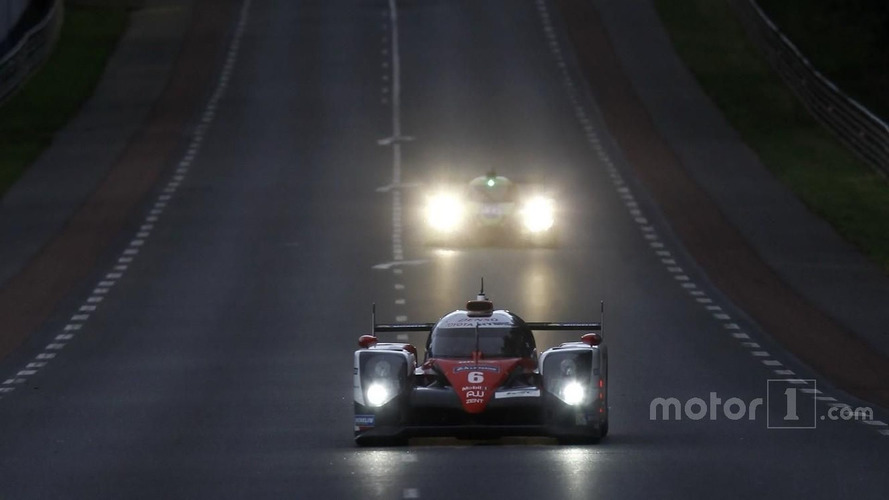 Over the past four hours, Porsche suffered calamities in both LMP and GTE Pro but the marque's remaining 919 Hybrid is healthy, fast and splitting the two Toyota TS050s.

The Porsche challenge was halved when Brendon Hartley pitted the #1 919 Hybrid with skyrocketing water temperatures, and resumed 19 laps down, but then the car all-but died on track again, trundling back to the pits at around 50mph.

A Safety Car for debris on track caused by shunted GT cars saw the Safety Cars emerge. This bewildering system, with multiple clumps of cars spread around the 8.469-mile track, saw Stephane Sarrazin’s lead in the #6 Toyota blossom from 75sec to around 2min30sec, although he stopped at the end of the 31-minute yellow-flag period to hand over to Mike Conway. That allowed Neel Jami in the #2 Porsche to take advantage of the Japanese car running on cold tires to sweep past and take the lead on lap 139, and the Swiss extended that gap to 5.7sec over the next four laps.

Jani then pitted the Porsche to hand over to Romain Dumas, who resumed in third, 1.6sec behind the second Toyota piloted by Sebastien Buemi, a gap that extended out to some 12sec.

A second safety car period caused by the #91 Porsche blowing up, bunched them back together, and just three corners into the first green-flag lap, Dumas rocketed past Buemi to split the Toyotas once more.

The #8 Audi continued three laps down having had to stop and fix the side-panels that show the car number. Meanwhile its sister #7 car was nine laps adrift, having had a turbo change and taking a trip through the gravel, but then stopped on-track just before half-distance, with Marcel Fassler at the wheel. He got going again, albeit desperately slowly.

Thus in fifth place is the #13 Rebellion Racing R-One of Dominik Kraihamer, Alex Imperatori and Matheo Tuscher. Although the car picked up a rear-left puncture some four hours ago, it occurred near the pits so didn’t lose the car much time.

The Oreca vs Alpine battle continued with Mathias Beche, Pierre Thiriet and Ryo Hirakawa in the TDS Racing Oreca leading Nicolas Lapierre, Gustavo Menezes and Stephane Richelmi in the Signatech Alpine until a four-minute stop dropped the TDS car to third. Thus the Signatech machine took over the lead of the class, with Rene Rast, William Stevens and Roman Rusinov second in the G-Drive Oreca.

G-Drive’s Gibson-Nissan, shared by Jake Dennis, Giedo van der Garde and Simon Dolan was fourth but a lap down.

Ford GT’s excellent showing has been maintained, with the #68 car of Dirk Muller, Joey Hand and local hero Sebastien Bourdais, along with the #69 Ford, piloted by Scott Dixon, Richard Westbrook and Ryan Briscoe taking the battle to the Risi Competizione Ferrari 488 of Toni Vilander, Matteo Malucelli and Giancarlo Fisichella. However, the #68 Ford got unlucky while leading, as its pitstop coincided with a Safety Car period caused by the #91 Porsche 911 blowing its engine and dumping oil on the track all through the Porsche Curves.

That extended delay did at least give the Ganassi Ford team a chance to make it a long stop and change the brakes of the leading #68 car but Muller re-emerged 2min15 adfrift of Vilander’s Ferrari and 1min15sec from Westbrook’s Ford.

However since then both Fords have gained on the lead Ferrari: at half-distance, Briscoe had the #69 car 45sec behind, with Hand a further minute adrift.

Not to be ignored in the GTLM battle, since it is only one lap down, is the #95 Aston Martin Vantage of Nicki Thiim, Marco Sorensen and Darren Turner. It’s closest competition on track comes from the best of the Corvette C7.Rs, the defending class-winning #64 car of Oliver Gavin, Tommy Milner and Jordan Taylor, heading the second Aston Martin of Jonathan Adam, Fernando Rees and Richie Stanaway.

With 12h30min to go, Jorg Bergmeister pitted the #92 Porsche 911 puffing smoke out of its right-side, and was dragged into the garage. It has not been seen since.

David Heinemeier Hansson, Pat Long and Khaled Al Qubaisi led in the Abu Dhabi-Proton Racing Porsche 911 RSR continued to lead the class but this battle is heating up considerably. DHH is being chased hard by the Scuderia Ferrari 458 Italia of Townsend Bell, Jeff Segal and Bill Sweedler who has slashed the lead from 70sec to 30sec in the space of seven laps (including a pitstop).

Third in class is the polesitting Clearwater Racing Ferrari 458 of Rob Bell, Kelta Sawa and Weng Sun Mok which had to pit for shedding parts on the track. It is currently a lap down, but that’s still enough to put it ahead of the leading AF Corse Ferrari, driven by Emmanuel Collard, Rui Aguas and Francois Ferodo.