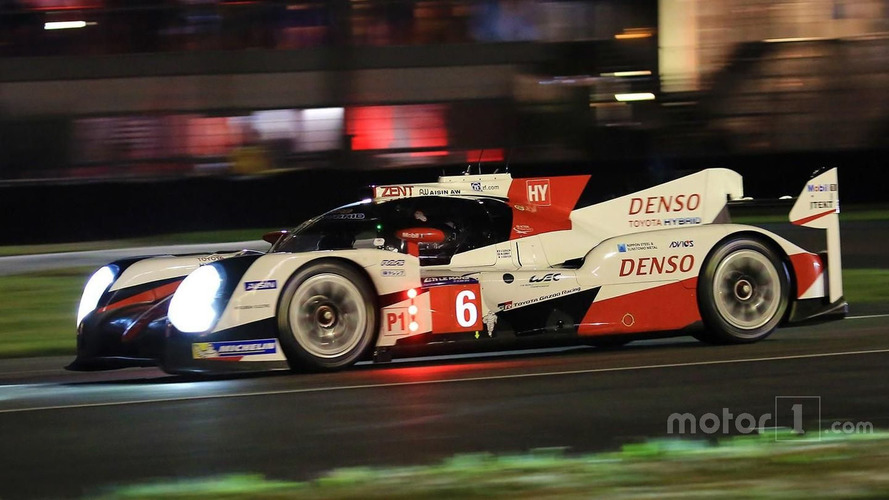 The cat-and-mouse battle between the #1 Porsche and the #6 Toyota continued into the darkness at Le Mans as the pair to swapped the lead throughout most of the evening.

Mark Webber and Kamui Kobayashi traded lap times in the fifth and sixth hours, with each setting fastest laps of the race in the 3m21s bracket.

However, luck swung Toyota’s way in the seventh hour as dusk approached. When a slow zone was called for the crashed Pegasus Morgan LMP2 car at Mulsanne Corner, Stephane Sarrazin, who had just emerged from the pits, cleared the incident before the slow zone was called.

Timo Bernhard wasn’t so fortunate, and lost 40 seconds slowing for the incident, handing the lead to the #6 Toyota, which continued to utilise its 14-lap fuel strategy effectively.

At 2300 local time, the #6 Toyota driven by Sarrazin held a 21-second advantage over the #2 Porsche 919 Hybrid, which in Jani’s hands cleared Bernhard in the #1.

The #5 Toyota had fought back from an extra pit stop due to a mystery vibration while Anthony Davidson was at the wheel, to run fourth at the eight-hour mark after the Brit handed over to Kazuki Nakajima.

Audi's #8 car had dropped back slightly from the lead group and was behind the #2 Porsche after Oliver Jarvis had the passenger side door replaced, costing half him a minute extra in the pits.

In addition to these woes, rumours were rife in the paddock that Audi has instructed its drivers not to use the kerbs too recklessly in order to avoid a repeat of damaging some of the systems on its car.

Just shy of the eight-hour mark, both Audis pitted after a call from their engineers ordered them to stop for repairs, losing them more time after a difficult start to the race.

Recovering from the turbo problem early in the race, the #7 Audi had marched up the order after impressive stints by first Benoit Treluyer and then Marcel Fassler to get back up to seventh overall.

Rebellion Racing controlled the LMP1 privateer class as the #13 R-One-AER headed the #12 car, which was delayed earlier in the race when rain water in its airbox caused problems.

The LMP2 scrap continued to provide close and entertaining action throughout the early evening, and remained wide open as darkness descended.

Manor lost the lead just before the sixth hour when Matt Rao undid some of Roberto Merhi’s excellent early work when he spun at the Dunlop chicane while under pressure from Ryo Hirakawa’s Thiriet by TDS Oreca 05-Nissan.

The Manor team’s misery was compounded when Rao pitted at 2130 with a starter-motor issue and dropped back through the field.

Hirakawa took over the lead and opened up a large gap to the opposition which was headed by the #36 Signatech Alpine, the KCMG Oreca, and the #38 G-Drive Gibson.

The other G-Drive entry, which started from pole, incurred a drive-through penalty for refuelling with the engine still on. It eventually re-claimed fourth place from the #38 G-Drive car, as Roman Rusinov was able to get ahead of Simon Dolan.

That became third when Tsugio Matsuda stopped the KCMG ORECA on the Mulsanne Straight and was unable to get re-started, ending the Hong Kong team's title defence.

Ford’s return to Le Mans for the first time in 34 years was making the early race headlines as they led for most of the evening.

The Blue Oval started to take control of the GTE Pro class after a fierce battle in the fifth hour when the #68 and #69 cars of Joey Hand and Ryan Briscoe caught and passed Toni Vilander’s Risi Competizione Ferrari.

From that point on, the Fords pulled a small gap on the #82 Ferrari, with Hand putting in a starring performance as he led the #69 USA car and then the #66 UK-entered Ford GT.

Ferrari placed second at 2300 with Fisichella now in the Risi 488 GTE. The former Grand Prix winner was just four seconds behind Dirk Muller in the #68 Ford, the German having taken over from Sebastien Bourdais in the eighth hour.

The #66 Ford of Pla, Mucke and Johnson ran third 26 seconds back. The #69 Ford Chip Ganassi car Briscoe, Westbrook and Dixon made it a 1-3-4 for American manufacturer.

The pseudo-works AF Corse cars struggled with issues. The much delayed #51 car still circulated but essentially out of contention, while the #71 car of Bird, Bertolini and Rigon placed eighth in class after delays due to electrical issues.

The leading Aston-Martin of Darren Turner, Marco Sorenson and Nicki Thiim placed fifth after a clean and solid run kept them in contention.

Corvette and Porsche struggled on pace once the track had fully dried with the best of the Chevy’s – the #64 car -  in ninth position.

The GTE Am class was led for much of the evening by the Abu-Dhabi Proton 911 RSR of Pat Long, David Heinemeier-Hansson and Khaled Al Qubaisi.

But just before 2300, the #98 Aston Martin of Pedro Lamy surged into the lead ahead of Long, before pitting to hand over to Paul Dalla Lana, giving the lead back to the #88 Porsche.