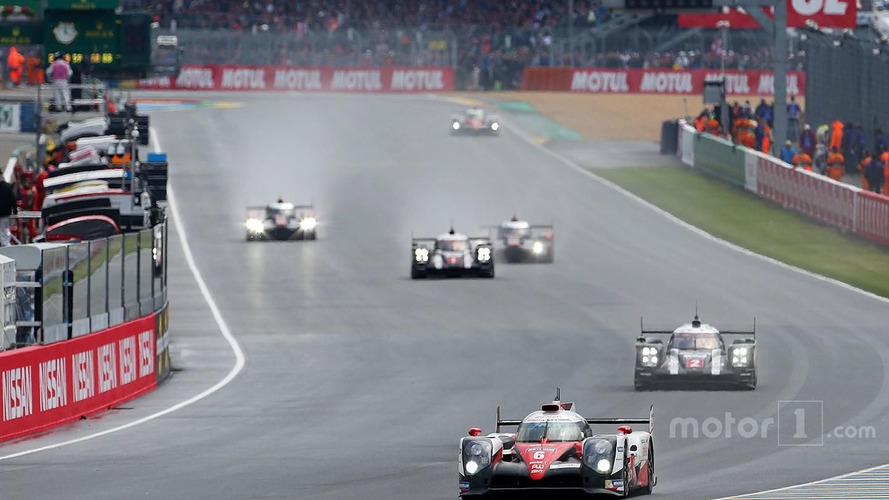 Toyota led the Le Mans 24 Hours after two hours, following a frantic start to the race which saw five of the six LMP1 hybrid entries lead the event.

After a heavy rain shower soaked the track half an hour before the start, race director Eduardo Freitas made the decision to start the race under the Safety Car.

Neel Jani led the 60 car field away at 3pm, but it wasn’t until 53 minutes gone that the Safety Car pitted and green flag racing began.

As Jani opened up a small buffer at the front, behind him the opening exchanges saw some ferocious action at the front of the field.

Just as the clock ticked through to 60-minutes, Mike Conway grabbed the lead from Jani on the run through Maison Blanche and in to the Ford Chicane.

The #6 Toyota then proceeded to pull away at a rapid rate of knots and opened out a healthy gap as Conway lapped upwards of four seconds a lap quicker than the opposition, after the team elected to start both cars on the Michelin 'hybrid' slick/intermediate tyres.

Toyota ran 1-2 until at the start of the second hour as the team maximised its tyre strategy. But after Audi opted to leave Andre Lotterer in the cockpit after pitting for slicks earlier than their rivals, it was the rapid German who emerged ahead after the pitstop shake-out.

With the #1 Porsche having changed drivers from Bernhard to Hartley, Lotterer was soon under increasing pressure from the Kiwi, who was flying in the now-almost fully dry conditions.

Another on-track battle for the lead didn’t happen though as the first reliability bombshell of the race announced itself after 80 minutes, as Lotterer pitted the #7 Audi and was wheeled back in to his box for a turbo change.

Benoit Treluyer emerged after the work was completed, but 20 minutes had been lost in the pits, dropping the car to 58th overall.

While there was dejection for one side of the Audi garage, there was hope on the other as Loic Duval started to harry Hartley for the lead. The Frenchman made his move on the Mulsanne after 80-minutes and was able to accrue a small gap to Hartley.

But with rain again starting to fall at sections of the circuit, Hartley soon fought back and re-claimed the lead after 1hr35mins. The Kiwi put a decisive move on Duval, but was unable to shake off the R18 and the two ran almost nose-to-tail until just before the end of the second hour.

At this stage, Mike Conway was homing in on the front two, but was unable to get close enough to make a move. When Duval and Hartley pitted on successive laps, Conway took over at the front again.

The #5 Toyota driven by Sebastien Buemi made it a Toyota 1-2, but like Conway was yet to make a second scheduled stop.

The #2 Porsche that led in the opening exchanges placed fifth, with Romain Dumas having taken over from Neel Jani at the first stop.

The LMP2 class saw Rene Rast's #26 G-Drive Oreca lead until the first round of stops, allowing Nicola Lapierre a brief spell in the lead with the #36 Signatech Alpine.

The Michael Shank Ligier driven by Laurens Vanthoor enjoyed a lap in the lead, but soon had to serve a penalty for changing engine after qualifying.

But taking advantage of a quick stop was the Manor team, with Roberto Merhi taking over the lead after the first stops in the #44 Oreca. The Spaniard pulled out a substantial gap over the second-placed Thiriet by TDS Oreca driven by Mathias Beche.

The 2014-winning Gibson 015S-Nissan driven by Jake Dennis latched on to the back of Beche, but was himself overtaken by a flying Jonny Kane before he could attack the TDS car and dropped to fourth.

Reeling back the years, Kane then went after Beche for second place but was unable to make a significant impression on the gap. After the second scheduled stops. Kane sat third in the Strakka Gibson 015S-Nissan.

Poleman Rast ran fifth but was right on the tail of the sister G-Drive car of Dennis.

In LMGTE Pro, Ford led away from the green flag start with the #68 car of Dirk Muller leading from stablemate Richard Westbrook in the #69 Ford Chip Ganassi Team USA entry.

But Frederic Makowiecki was a man on a mission in the #92 Porsche during the opening laps, as he scythed his way past several cars to latch on to the tail of the lead battle, which was also joined by James Calado’s AF Corse Ferrari.

After Westbrook pitted, Makowiecki  surged in to the lead of the class by making moves on Calado and then leader Muller, who fell back after a slow pit stop when his car had to be manoeuvred due to congestion in the pit itself.

Ford ran second with Westbrook’s some 15 seconds behind Makowiecki, but there was disappointment too for the Blue Oval as the #67 car suffered a gearbox problem and didn’t take the start of the race.

The car, which had Andy Priaulx at the wheel, emerged from the pits but was soon back having further attention.

As the clock ticked to two hours, Makowiecki had a three second cushion over Westbrook. Behind came a trio of Ferraris with Calado’s #51 car heading the Risi entry of Giancarlo Fisichella and the #71 AF Corse car driven by Sam Bird.

Wolf Henzler in the #78 KCMG Porsche led the LMGTE Am class from the #88 Abu-Dhabi Proton Porsche ,with Patrick Long at the wheel.