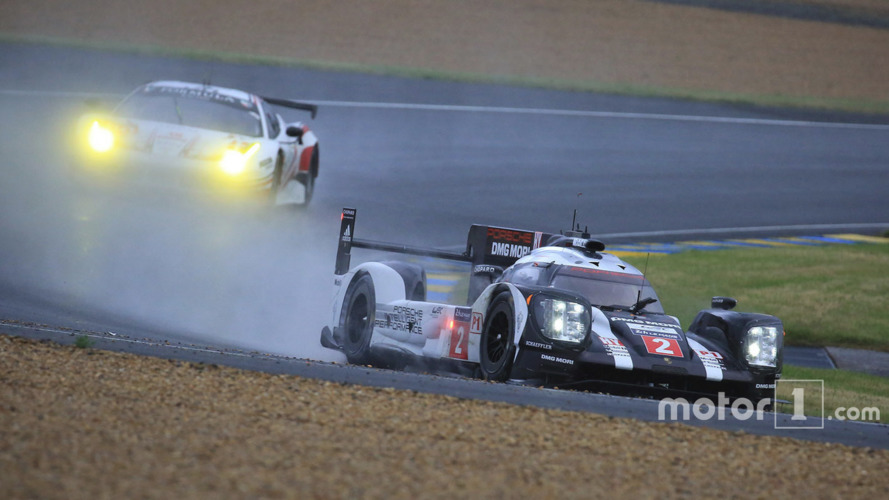 Audi and Toyota still in the hunt.

The second qualifying session for this weekend’s Le Mans 24 Hours saw little changes in the provisional grid order, after a succession of heavy showers hit the Circuit de la Sarthe on Thursday.

The #2 Porsche 919 Hybrid of Neel Jani, Roman Dumas and Marc Lieb remains on provisional pole position after two hours of running in mixed conditions, which saw only a short window on a fully dry circuit.

Brendon Hartley set what was the fastest lap of the session in the #1 Porsche, a 3m22.307s in the driest of the conditions.

Toyota came the closest of the LMP1 teams to bettering its Wednesday time, but despite the Sebastien Buemi's best efforts, the #5 Toyota TS 050 Hybrid was unable to usurp the sister #6 car for third place.

Audi had a quiet session, in which its #7 R18 e-tron quattro joined relatively late while it was checked before heading out on to track.

The #8 Audi had its best time from qualifying one deleted after receiving a fuel flow infringement punishment, demoting it to sixth behind the #7 car.

The other change in the LMP1 class came courtesy of the #4 ByKolles entry, which returned to the track for the first time since Wednesday's free practice session, when it caught fire on the Mulsanne Straight.

Pierre Kaffer set a best time of 3m34.168s in the brief dry period to jump to ninth behind the two Rebellions, which failed to improve their times despite Nelson Piquet Jr threatening to improve in the #12 R-One early in the session.

LMP2 still sees the same order as at the end of Wednesday evening, with the #26 G-Drive Racing Oreca 05-Nissan still on provisional pole position from the #35 Baxi DC Alpine.

In the GTE Pro class, which has seen escalating controversy due to Ford and Ferrari's remarkable pace in first qualifying, there was also little running, with no order changes.

The #68 Ford GT therefore remains on class pole from the #69 car and the #51 AF Corse Ferrari.

One of the few significant improvements came in the GTE Am class, as Pat Long promoted the Abu-Dhabi Proton Porsche from seventh to third in class.

The category continues to be led by the #61 Clearwater Racing Ferrari.