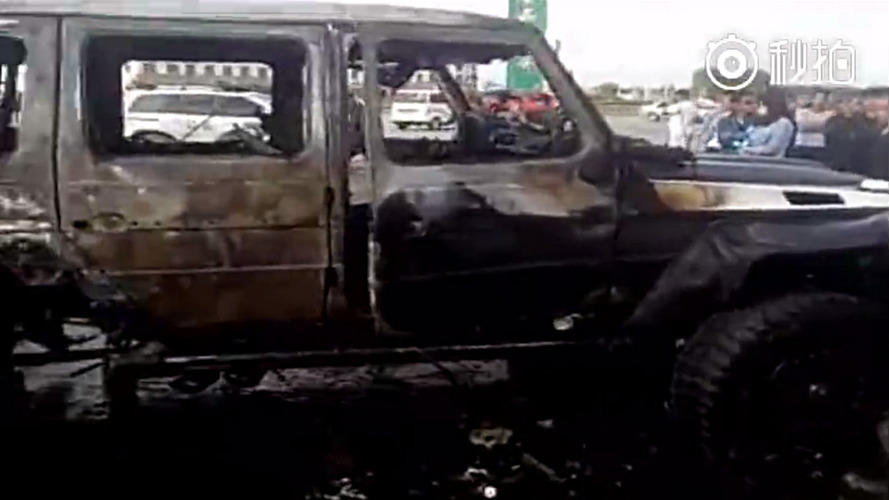 A light road accident in the city of Guangzhou in Guangdong Province, China, put the end of life for a unique Mercedes-Benz G63 AMG 6x6 tuned by Mansory. The crash involved the German vehicle and an older Hyundai Santa Fe.

We don’t know all the details surrounding the crash, but, as far as we can judge from the photos, it wasn’t a high-speed collision. Taking a look at the cars, the 6x6 truck has some minor damage at the front right part of the body, while the South Korean SUV suffers some damage on the left front wheel.

Given that, it remains a real mystery what made the Mansory-tuned car burst into flames. Most likely, it was a fuel hose that broke, but an electric problem also sounds like a potential reason for the fire. Speaking of which, it completely melted the interior of the car, three of the tires, and almost all nonmetallic parts of the body.

This exact vehicle has 840 horsepower (618 kilowatts) and 737 pound-feet (1,000 newton meters) of torque, thanks to the work of Mansory. The tuning company installed race-derived pistons, rods, bearings, crankshaft, and cylinder heads to achieve these impressive figures, while also lowering the curb weight of the car by using a carbon-fiber bonnet.

Note: The gallery below also shows the vehicle before the accident.