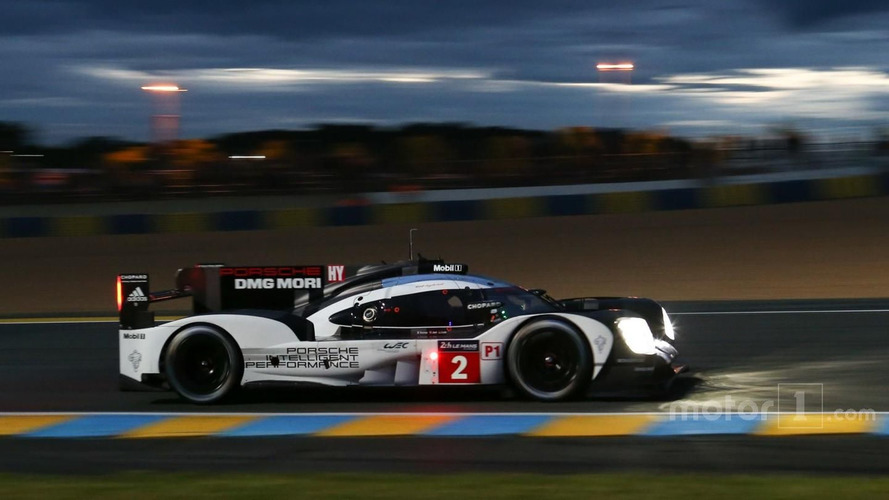 Porsche dominated the first qualifying session for the Le Mans 24 Hours, with Neel Jani setting a blistering pace in the #2 Porsche 919 Hybrid to take provisional pole.

Jani stopped the clocks at 3m19.733 in a typically committed lap to go just under half-a-second quicker than teammate Timo Bernhard who registered a 3m20.203s in the #1 Porsche.

With Thursday's weather forecast indicating showers during the evening, Porsche lost no time in showing its qualifying pace in the Wednesday night session.

Toyota was just over a second adrift of the outright pace with the #6 TS 050 Hybrid recovering from a significant accident in practice to take third, with Stephane Sarrazin setting a 3m20.737s in the opening minutes to beat the #5 car by a second.

Audi had a session to forget, as both of its R18 cars were delayed in getting onto the track at the start of qualifying.

Things got little better as an attempted qualifying run by Benoit Treluyer in the #7 machine only brought a 3m22.670s lap, just over three seconds away from the provisional pole time of Jani.

The #8 Audi missed most of the first hour when repairs were completed after Lucas di Grassi’s moment at the first chicane in practice damaged aspects of the cars drivetrain.

Oliver Jarvis and then Loic Duval ventured out, but a 3m26.750 was initially the best it could achieve.

But when di Grassi was given new tyres, the Brazilian turned in a 3m22.466s lap to grab fifth place from the sister #7 Audi.

Matheo Tuscher, the youngest driver in the field, gave a fine account of himself as he set the best LMP1 privateer time on a 3m26.586s in the #13 Rebellion R-One-AER.

That was enough to beat the #12 car by eight tenths, with the #4 ByKolles CLM not setting a time after its practice engine fire.

In the LMP2 division, the #26 G-Drive Racing Oreca led for all bar a few minutes of qualifying, as Rene Rast stamped his authority over the field.

The factory Audi driver beat his own initial fastest time set during his first stint at the wheel. The German peaked on a best of 3m36.605s to finish 0.570s ahead of the #35 Baxi DC Signatech Alpine driven by Nelson Panciatici.

The 2014 ELMS champion however was placed under investigation for the time which was set when Giancarlo Fisichella’s Ferrari was being recovered from a gravel trap.

The other Signatech Alpine driven by Nicolas Lapierre claimed third, ahead of the Manor entry of Roberto Merhi who set a late time to secure fourth.

The best Ligiers were the Michael Shank JS P2 in fifth and the #31 ESM entry in sixth, thanks to times by Laurens Vanthoor and Pipo Derani respectively.

Gianmaria Bruni looked to have again claimed honours in GTE Pro with the new shape Ferrari 488, as the rapid Italian set a 3m51.568s.

However, Briscoe’s time was itself smashed on the very last lap by Dirk Muller, who took provisional pole for the #68 Ford on a 3m51.185s.

Harry Tincknell, driving the #67 Ford GT, earned the fourth fastest time, while Olivier Pla took fifth in the #66 car that was repaired after slight damage was inflicted by Billy Johnson in practice.

The Blue Oval garnered four of the top five positions on the provisional GTE Pro class grid as the top five read Ford-Ford-Ferrari-Ford-Ford.

The rest including Porsche, Corvette and Aston Martin were well detached from the pole battle.

Rob Bell again made the GTE Am class his own personal fiefdom as the British GT ace turned in a 3m56.827s lap in the Clearwater Racing Ferrari 458 Italia to put himself 0.7s clear of the #98 Aston Martin, which was driven to the fastest time by Pedro Lamy.

The only red flag of the two-hour session came when Fisichella spun his Risi Competizione Ferrarispectacularly at the Porsche Curves after 33 minutes.

The former Grand Prix racer had to be extricated from the gravel, but was still able to place seventh in the GTE Pro class behind the #71 AF Corse Ferrari.

There were several slow zone calls, including ones for the spun Beechdean Aston Martin of Andrew Howard, the Pegasus Morgan of Remy Striebig, Pu Jun Jin’s slightly damaged Eurasia Oreca, and the #63 Corvette of Ricky Taylor, who nudged the wall at Mulsanne Corner.