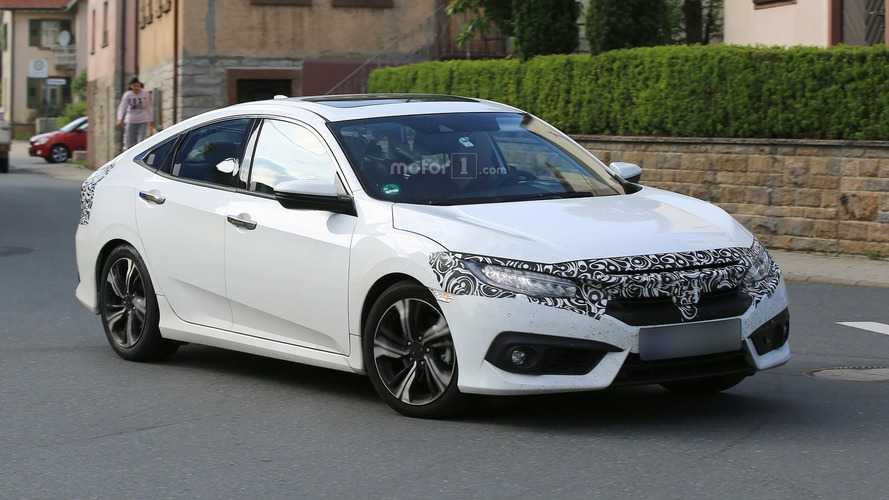 Honda is putting the finishing touches on the Europe-bound 2017 Civic sedan and hatch.

The reason why Honda didn’t even bother to fully camouflage the sedan it’s because people already know it will look virtually the same as the U.S. version which has been on sale for quite some time. As for the hatchback, it’s wearing a swirly disguise to hide what will essentially be a less exciting design of the Civic Hatchback Prototype shown back in March at the Geneva Motor Show.

Of the two prototypes, the five-door hatch is more interesting as there are some wires sticking out from the hood. That probably means Honda was making some last-minute tweaks to the newly developed turbocharged 1.0-liter, three-cylinder engine which will be offered in the European Civic. Final output numbers are not available at this point, but it will have somewhere in the region of 127 horsepower (94 kilowatts) and 148 pound-feet (200 newton meters) as seen in a prototype tested by Autocar some months ago.

The little gasoline engine will be teamed up to a six-speed manual transmission which will allow the Civic in Euro flavor to return an impressive 66 mpg U.K. (55 mpg U.S. or 4.2 liters / 100 km) and emit just 99 g/km.

If you are not too fond of getting a compact car with such a small engine, you’ll be happy to hear Honda will also sell the 2017 Civic sedan and hatchback on the old continent with the turbocharged 1.5-liter from the American model. In addition, we are also expecting to see an updated version of the turbodiesel 1.6-liter i-DTEC unit which will be the engine of choice for drivers doing a lot of highway miles.

Both models will probably be unveiled at the Paris Motor Show programmed for early October before going on sale at the beginning of 2017. It’s important to mention the hatch won’t remain a Euro-only affair, as Honda has plans to sell the five-door model in United States as well.