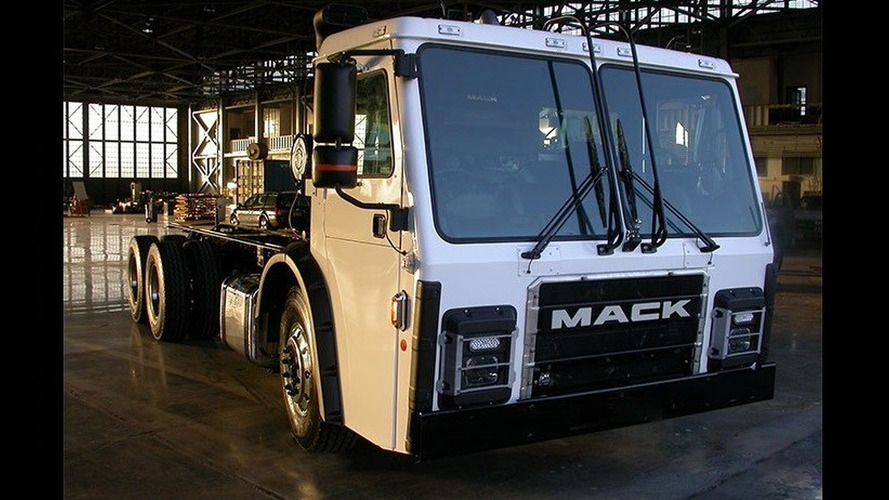 A cleaner garbage truck which eschews the diesel engine for quad electric motors.

Mack Trucks joined forces with Wrightspeed to create an electrified garbage truck which was on display last week in Las Vegas during 2016 WasteExpo, a waste management and recycling conference. Tesla Motors co-founder Ian Wright is also the founder of Wrightspeed and the company was in charge of retro-fitting the powertrain to Mack’s LR model to create a greener garbage truck.

The Wrightspeed Route 1000 powertrain works together with a battery pack featuring plug-in capabilities and offering enough energy for up to 24 miles (38.6 kilometers). Once the juice is depleted, the 80-kW turbine generator kicks in and uses diesel or natural gas to recharge the batteries. There’s also a regenerative braking system to fill up the battery while the truck is braking and it also lowers brake wear which in return cuts maintenance costs.

Volvo’s subsidiary Mack says the four electric motors have enough punch to power vehicles up to 66,000 pounds (almost 30 tons) on grades up to 40 percent steep. As it’s the case with electric motors, the torque is delivered instantly and Mack mentions the driving experience is similar to conventional diesel trucks.

There’s no word just yet about putting the electric-powered Mack LR into production, but it’s a sign that alternative drivelines designed to diminish fuel consumption and vehicle maintenance costs are becoming more widespread.

Mack Trucks showcased a Mack® LR® model retrofitted with the Wrightspeed Route™ 1000 powertrain in its booth at WasteExpo 2016. Mack is the first OEM to evaluate Wrightspeed technology within a Class 8 refuse vehicle.

Designed as an alternative driveline, the Wrightspeed Route is a range-extended electric vehicle powertrain that helps reduce fuel consumption and vehicle maintenance costs.

“Mack is the refuse industry leader because we’re constantly seeking to pioneer new ideas and innovations,” said Dennis Slagle, president of Mack Trucks. “It’s something we’ve done throughout our 116-year history, and it’s something we will continue to do. Wrightspeed shares this pioneering spirit, which is why we’re eager to evaluate their Route powertrain technology.”

The Wrightspeed Route powertrain uses electricity to deliver 100 percent of the vehicle’s propulsion. The system features an advanced plug-in-capable battery pack that enables a purely electric range of up to 24 miles. When the batteries’ charge is depleted, an 80 kW, fuel agnostic Fulcrum™ Turbine Generator, which can operate on natural gas or diesel fuel, recharges the batteries, enabling Route-equipped vehicles to have unlimited range with refueling.

Additional recharging comes from the Route’s 730 kW regenerative braking system, which generates electricity as the vehicle comes to a stop. Regenerative braking helps Route-equipped vehicles to cut down on maintenance costs, as braking force – and subsequent brake wear – is significantly decreased.

Electricity from the battery pack powers four Geared Traction Drive™ (GTD) electric motors, enabling the Route powertrain to power vehicles up to 66,000 pounds on grades as steep as 40 percent. With full torque available from zero rpm, the Route provides a driving experience comparable to diesel-powered trucks.

“At Wrightspeed, we’re focused on designing the best-performing powertrains for forward-looking OEMs and fleet operators,” said Ian Wright, CEO and founder of Wrightspeed. “Mack represents one of the most innovative manufacturers in the refuse industry, and we’re proud to showcase our technology alongside their Mack LR model. We thank them for recognizing our powertrain as a potential addition in their pursuit of innovation"

The Mack LR model equipped with the Wrightspeed Route powertrain will be on display in Mack booth no. 1327 throughout WasteExpo 2016, which runs June 7-9 at the Las Vegas Convention Center.