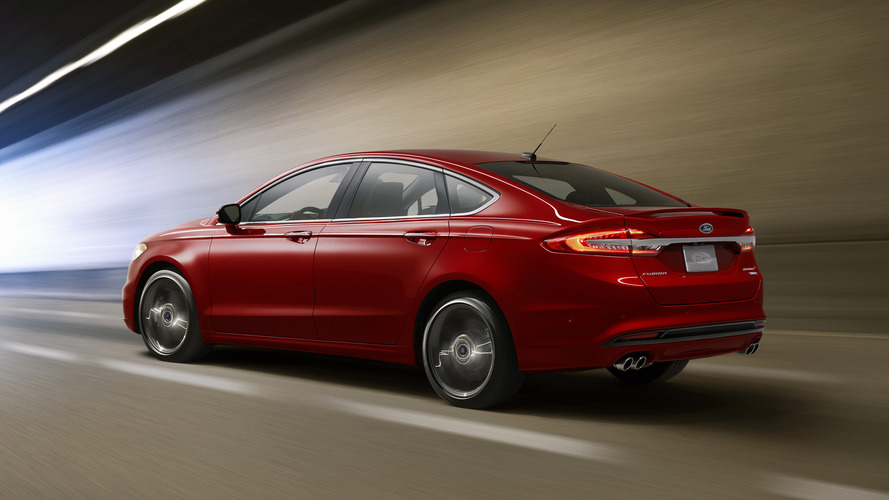 More torque than originally promised for the biturbo midsize sedan.

The 2017 Ford Fusion Sport will pack an even greater punch than we had been led to believe. When the car was introduced, Ford says its 2.7-liter biturbo EcoBoost V6 packed 325 horsepower and 350 pound-feet of torque. Today Ford revealed that the latter figure is actually a heady 380 lb-ft.

That makes the Fusion Sport the most powerful midsize sedan by a big margin, beating out non-turbo V6 rivals like the Honda Accord, Nissan Altima, and Toyota Camry. The Sport is the only Fusion trim level offered with the 2.7-liter engine. The downside to all its extra grunt, however, is that it’s the least-efficient 2017 Ford Fusion, with EPA ratings of 17 miles per gallon city and 26 mpg highway.

Ford is adding serious EcoBoost® muscle to its Fusion sedan in an all-out assault on more expensive German sport sedans.

Following on the success of Explorer Sport, which has seen one in five buyers come over from recent Audi, BMW and Mercedes-Benz experiences, Ford has its eyes not only on owners of V6-equipped Toyota Camrys and Honda Accords, but some other distinguished German models that command a five-figure premium over the 2017 Fusion Sport.

Since the newest-generation Fusion launched in 2012, midsize car buyers have been asking for a performance version, says Wade Jackson, Ford Fusion marketing manager.

“It’s not just Fusion buyers who want something hotter,” Jackson says. “Owners of other midsize sedans, along with our own dealers, ask repeatedly. So buyers get a 2.7-liter EcoBoost that makes 325 horsepower and a more impressive 380 pound-feet of torque.”

These consumers also crave a car that’s much more distinctive inside and out, Jackson explains. “Cross-shoppers will be shocked by the bang for the buck our new Fusion Sport delivers,” he says.

Ford has reason to be confident with its newest sport-minded offering. While Explorer sales rose 24 percent from 2013 to 2015, Explorer Sport jumped 103 percent. Edge sales were close to flat over that same period – mostly due to model changeover – but Edge Sport jumped 62 percent.

For discerning sport sedan buyers seeking the ultimate in braking and handling performance, a summer-only tire package will be available as well.

The 2017 Ford Fusion Sport starts at a very un-German sports sedan price of $33,475, and that’s with all-wheel drive as a standard feature.