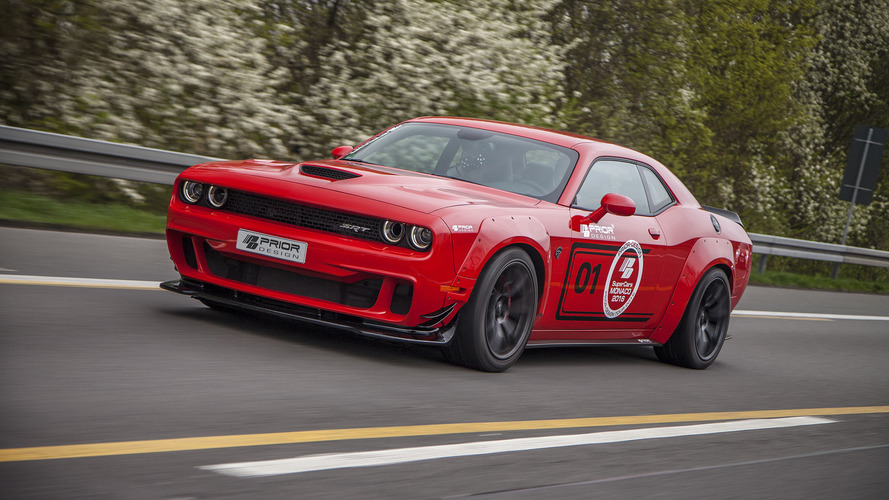 Output remains at 707 horsepower, though.

The Dodge Challenger Hellcat's mix of retro-inspired muscle car styling cues and a massive supercharged engine defines the coupe as a quintessentially American vehicle. However, the PD900HC widebody kit from the German tuners at Prior Design shows that a European sensibility can make the coupe look even meaner.

The biggest changes in the firm's kit are the broader fenders that give the muscle car a race-ready demeanor. The package also includes a new front bumper with canards at each corner and a ground-scraping splitter. A massive rear diffuser should suck the Challenger down at speed, and side skirts make the vehicle appear closer to the ground. A trunk lip spoiler finishes the upgrades.

Most of the added parts are in gloss black in these photos, and they look great in contrast with the body’s bright red paint. Prior Design also says the kit could fit any Challenger, not just the Hellcat.

Contrary to the PD900HC name, Prior Design doesn't boost the horsepower in addition to offering the widebody kit. "We didn't touch the engine, the car still has his 707 hp," the company told Motor1 in a statement. The Hellcat's stock grunt should be plenty for most buyers, though. This package gives the muscle car a more aggressive look to match its already copious power.

Source: Prior Design via Boldride