This reportedly is the fourth such fire and the cause has yet to be pinpointed.

Even though the Jaguar I-Pace isn’t regarded as one of those EVs that can spontaneously catch fire, well, that doesn’t mean it doesn’t happen, and when it does there's a strong chance its battery cells may be to blame.

The most recent is a fire that destroyed a 2019 I-Pace in Florida while the vehicle was reportedly parked and charging in a garage, with its owner driving it out (even though it was already billowing smoke) just before it went up in flames.

It occurred in mid-June of this year and the vehicle’s owner, Gonzalo Salazar, told Electrek that

On June 16, I plugged the car in before going to bed. In the morning of June 17, I woke up and unplugged the car. Later that morning, I set out to run some errands. I drove about 12 miles that morning before returning back home and parking the car back in the garage, leaving the garage door open. As I was doing things at home, I heard pops coming from the garage. I decided to go see where the sounds were coming from, and upon walking into the garage, I faced a thick wall of smoke. My thought immediately was, ‘When there is smoke there is fire,’ and I need to get the car out of the house garage.

We reached out to Jaguar and got this statement back:

Jaguar Land Rover North America, LLC is committed to our customers’ safety, and we are aware of this I-PACE incident in Boynton Beach, FL.  We have been in contact with and are cooperating with the customer’s insurance company expert regarding a vehicle inspection.  JLRNA is unable to comment further on your questions until the investigation is completed. 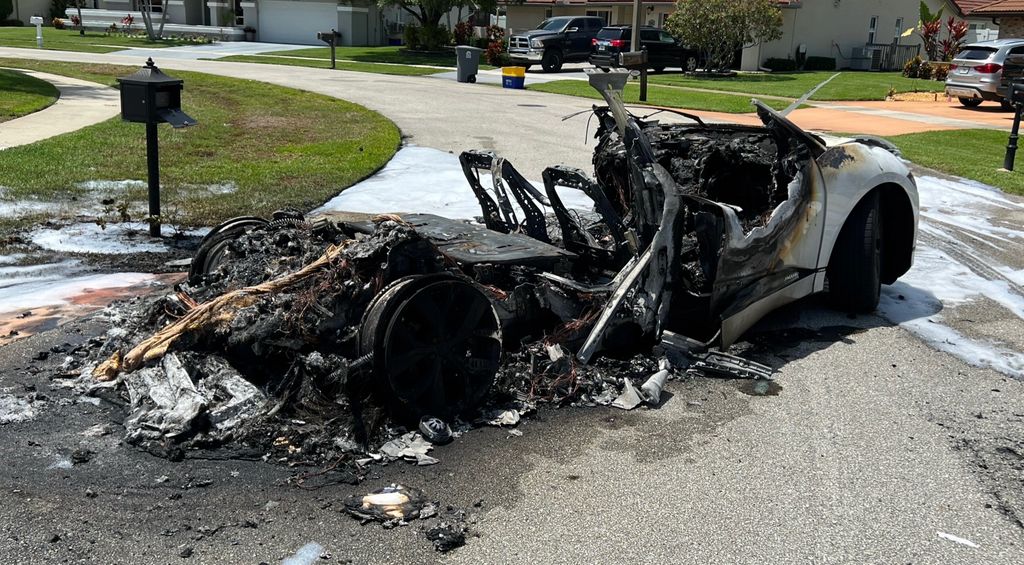 The owner decided to drive the vehicle out of the garage, even though it was already smoking, thus saving his garage and house from also going up in flames. After taking it outside, he says he heard even more pops and the smoke turned into a visible flame that quickly engulfed the entire vehicle, burning much of it completely away - you can see in the aftermath photos that only the front part of the vehicle remained untouched by the fire.

Apparently, emergency crews had a tough time putting out the fire and firefighters needed to use a special fire suppressing foam for it to be completely extinguished. The owner also notes that the insurance company sent in a forensic team to investigate the incident and declared the vehicle a total loss, and then Jaguar took it away to conduct its own examination of the wreckage, but apparently has so far not presented any conclusions.

According to Gonzalo Salazar, Jaguar hasn’t really been helpful in this matter and it has apparently not taken any responsibility for the incident yet, although it has also yet to present the conclusion of its investigation. The manufacturer did pick up the destroyed I-Pace, but it also left the owner with the task of cleaning up the street and debris on his own.

This is the fourth documented Jaguar I-Pace fire occurring under similar conditions, and the fact that this EV’s battery contains the same type of LG Chem cells that make up the Chevrolet Bolt EV’s pack may be cause for concern. It could prompt Jaguar to recall the I-Pace, as Chevrolet did and also Hyundai whose Kona EV features the same problematic battery cells.

The remains of the vehicle look a lot like what we saw in the I-Pace fire from Hungary, linked below.