Study reveals luxury car brand loyalty dropped by an average of 4.7% from January 2020 through April 2022, while Tesla's rose by 4%.

Brand loyalty is very important in any business, especially in a highly competitive sector like the car industry.

Essentially, brand loyalty is measured by what percentage of customers choose the same brand when trading in or buying their next vehicle. As you can imagine, some brands do better than others, and a recent study in this field points out some very interesting developments have taken place during the past two years.

While automotive brand loyalty fell for both mainstream and luxury marques since the beginning of inventory shortages in March 2021, Tesla was an exception to the rule.

In the luxury segment, loyalty rates declined by 4.7 percentage points in the 14 months after the shortages began (March 2021 through April 2022) to an average of 46.3 percent. Porsche and Land Rover were the worst-hit luxury brands, with losses of 8.5 and 9.2 percentage points, respectively. 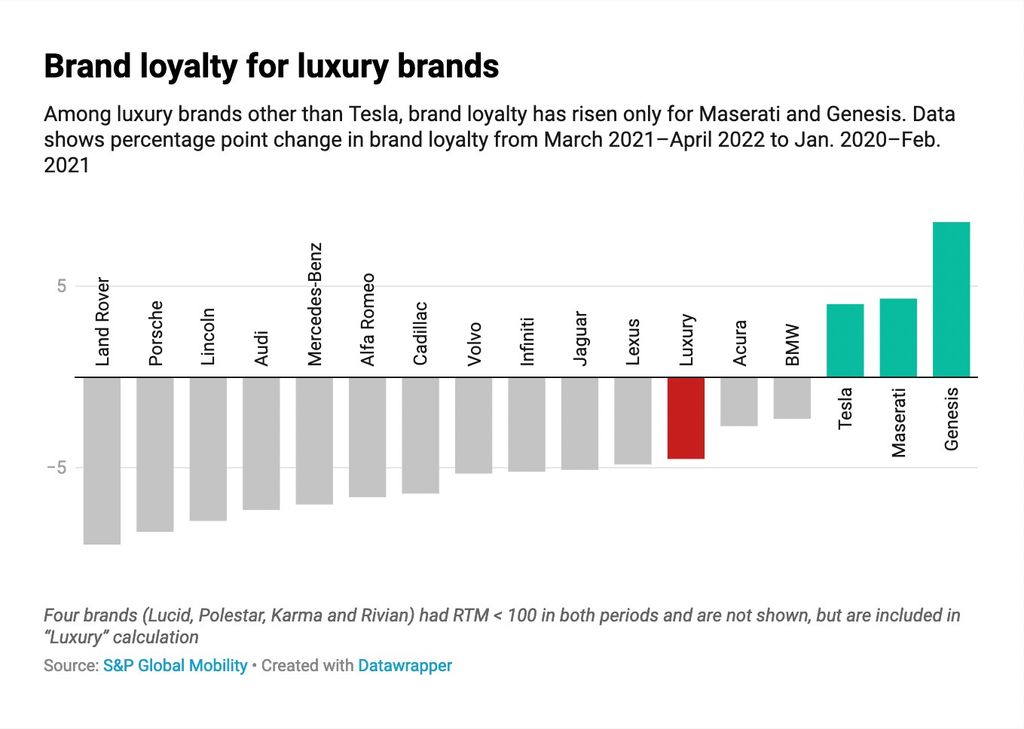 Meanwhile, Tesla was one of only three luxury brands that didn't see a decline in loyalty over the same period; quite the contrary, the EV maker's brand loyalty increased by around 4 percentage points. Tesla's growth rate was only exceeded by Maserati and Genesis, which are much smaller brands.

According to Libby, Tesla didn't achieve that by stealing customers from other brands. The company's conquest/defection ratio, which shows how many customers are defecting to Tesla divided by how many are leaving the brand, was low compared with both luxury and mainstream competitors.

Instead of poaching from other brands, Tesla is relying on internal loyalty to drive its growth. For example, the brand's most popular nameplate, the Model 3, saw its loyalty rate jump by over 7.5 percentage points to an average of 62.2 percent.

"The story here is that Tesla owners ... they're coming back to market in increasing numbers. But just as important, if not more important, they love the brand, and they're getting another one. So this is an ominous, frankly, ominous trend for the rest of the industry, something that has to be faced, and it has to be acknowledged."

According to Libby, Tesla owes a big part of its brand loyalty success to CEO Elon Musk, whom he describes as "an extraordinarily talented marketer." Tesla's diverse lineup is also listed as an important factor.