Next step is to take it to the wrong side of the motorway, obviously.

One of the best things about video games is that they allow you to do whatever you want without any consequences. Speaking in auto enthusiast language, this means racing on public roads, hitting traffic, and tuning cars with fake money. Oh, and there’s one more thing - flipping other cars with your apocalypse-style custom buggy. Wait, this particular activity is not only for video games.

That’s right, someone built an actual buggy that can flip real cars. Or, rather, the project is still under development but is looking very, very promising so far. A new video from the Burning Wrenches channel on YouTube takes us to the shop where this devilish creation is currently being made. At the top of this page, we’ve attached the last (for now) video from the series. 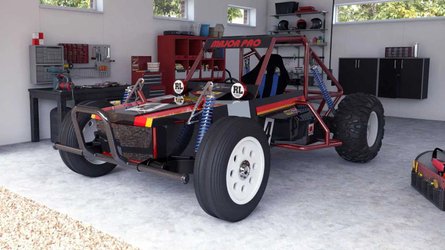 In this episode, we get to see the team behind the project working on the buggy’s adjustable suspension. Obviously, it’s not made for more comfort but rather, its design should allow the buggy to adapt its height to the vehicles it wants to flip. Automotive engineering at its finest!

Next, the constructors built and installed a custom-made dashboard where the gauges sit. Don’t expect anything fancy, though, as the dashboard was simply cut out from a sheet that was used for the buggy’s floor. Most of the gauges were taken from a UAZ, seemingly from the 469 rugged off-roader.

But that’s the boring part. Jump to the 10-minute mark of the video and you’ll see the buggy in action, going out of the shop and actually flipping a poor little red car in the yard. For safety reasons, that two-door that’s acting as a punching bag was tied so that it doesn’t fly off through the fence. The car, by the way, is a Lada Оkа.