It has all of the amenities of a G63 but with a truck bed on the back.

The Mercedes-Benz X-Class pickup was a flop, but companies converting the G-Class into a luxury truck has remained a boutique vehicle among the people who can afford them. To get a close look at one, check out this walkaround of a 2022 Brabus XLP Pickup that is based on G63 AMG.

Looking at this vehicle straight from the front, you could think it's just a regular G-Class with a few modifications. A tweaked front bumper has a brush guard and a Warn winch. Also, there's a roof rack with forward-facing LED lamps.

Along the side is where you really see that this G-Class is something special because of the pickup bed instead of a flat rear section. The roof rack attaches to tubular uprights along C-pillar and farther back that would appear to offer some roll-over protection.

The pickup bed is actually fairly small. It doesn't help that the full-sized spare wheel mounts in there and takes up even more space. A pair of 20-litre (5.283-gallon) fuel cans mount to the exterior of the cab. The hinged tailgate swings outward, unlike most pickups where it tilts down. 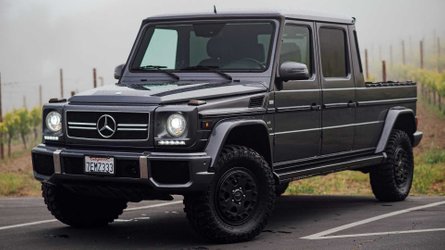 G-Class pickup truck for sale is a little weird, a lot of awesome 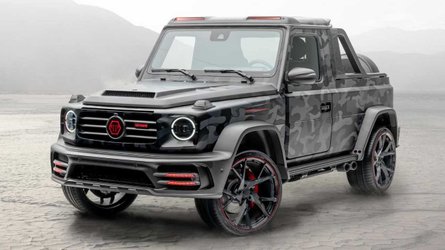 The interior is also straight from the G63, except for an extra panel with the controls for the extra lights and winch. This performance-focused grade of G-Class has a fantastic cabin from the factory, though. There are all of the luxury amenities a person could want like massaging seats and an entertainment system for the second row.

When Brabus debuted the XLP Adventure (gallery above), it showed the truck with an aggressive body kit that included a bonnet with a pair of nostrils. Also, the company pushed the engine output to 789 bhp (588 kW) and 738 lb-ft (1,000 Nm) of torque. There was a drone landing pad in the cargo bed.

After the look at the truck, the action shifts to the G-Class Experience Center. The location offers drivers a chance to go off-roading in a controlled environment to learn how to control these rugged vehicles.