Can an EV go the distance and not break the bank?

Hello and welcome back to the channel as we pick our favourite 5 Budget Long-Range EVs for 2022. Now when we say budget…it doesn’t necessarily mean the cheapest, we’re just talking about EVs that will be affordable for a lot of people and might be bought in good numbers!

But we haven’t just pulled up a list of the longest WLTP or EPA estimates, we’ve factored in price, functionality, and desirability also. We can’t imagine everyone’s going to agree…so let us know what you think in the video comments!

So…first up, and in no particular order, is a car that I had for a good few weeks last year and one that we’ve reviewed on this channel before…the Hyundai Kona. It’s an oldie, but a goodie! We’d love to include the IONIQ5 or the EV6 on that new bespoke e-GMP platform, but truth be told, we’re not amazed by their efficiency compared to the older generation. And they’re just that little bit more expensive.

The Kona has an advertised range of just under 300 miles. But the amazing thing is the efficiency of the Kona, even at highway speeds. At 64 kWh usable, it’s far from the biggest battery on the market, yet it still gets up there with the big boys in terms of distance covered. It’s smaller and lighter, and we’ve heard of some Kona drivers challenging the 350-mile mark from a charge in city driving!

You also have to factor in the price. Sure the Kona isn’t quite as desirable, fast, or quick-charging as some of the competition, but it’s also under a third of the price of some of them! With 11 kW AC and DC in the mid-70s, it won’t set the world alight, but it’ll do nicely for the vast majority of cases.

Next up represents some serious value for money, but not for you folks in the US, unfortunately! Now we’ve reviewed the MG ZS EV on the channel already and it’s got a great reception so check that out if you want to know more. Blake had it for a few days, put up a few hundred miles in it…and was amazed at the range!

The 73.6 kWh battery, with 68 kWh usable, is good for 275 miles on the WLTP cycle. And it’ll easily do that pottering around in summer, even clearing 300 miles on a good day. In winter, it’ll drop to about 200 miles on the motorway. But we don’t think that people will be buying this car for road trips across continents so the range is absolutely fantastic for the price!

Depending on the market you’re in, the ZS EV will charge at 7 or 11 kW on AC and will peak on DC at 76 kW. So it won’t be as effective on a long trip as say a Model 3 Long Range…but then again it’s about half the price!

And now on to a car that I hold dear in my heart…the Renault Zoe! Heck, I bought two of them over the years! So, ok, the Zoe doesn’t hit the top of the list in terms of desirability, but for us it represents really good value in terms of range per £ or € spent. Although with the likes of the MG and the Ora Cat on the way, that is being challenged admittedly!

You can get the entry-level Zoe ZE 50, which has a usable capacity of 52 kWh for well under £30k in the UK or early €30k in Europe. For that, you get a real-world range of nearly 200 miles. But the Zoe will probably be bought for city and extra-urban driving. In nice conditions there, with it weighing barely over 1.5 tonnes, you’re looking at getting close to 300 miles.

On charging, it’s a mixed bag. DC has always been Zoe’s weakness. But it shines on AC. Now, this mightn’t mean much to you due to how your country has set up its grid and electricity supply. But in many regions, 3-phase AC is prominent, and in the likes of France, there are sooooo many 22 kW AC posts. The Zoe takes 22 kW on AC so you can easily go from 5% back up to full in the time it takes you to go see a movie or meet a friend for dinner.

We had to think about this one hard considering the troubles the Bolt had in 2021. As we are writing this, production is still at a standstill. But we’re going to trust that the issue will be fully resolved, and the Bolt will hit some nice numbers again in 2022!

Apart from a few examples badged as the Opel Ampera-e, we didn’t really get the Bolt in Europe. But it’s been a mainstay in the US and beyond for years. But for 2022, we’re looking at a refreshed, much sharper-looking car. It’s going to have 200 bhp, 11.5 kW level 2 charging. The estimated EPA range rating is 259 miles from a battery of 65 kWh.
But it’s the price that will draw a lot of people, with the Bolt starting just above $30,000!

Next up we’re in Germany. The VW iD.3 has kind of been forgotten about since its bigger brother, the iD.4, came out and started hitting big numbers! But it’s always been on our radar. Sure, it has a few quirks and annoyances, but we still think there’s some serious value in there.

Since we’re talking range today, we’re looking at the Pro S that has 77 kWh usable battery. It’s not quite as efficient as some of its competition, but we’re not expecting it, considering the interior space and battery weight.

The Pro S has a WLTP range of about 345 miles, which is pretty impressive. The real-world range we think is around that 300-mile mark depending on the time of the year. In summer, in good conditions, we think you’ll challenge 400 miles on a good day.

And the iD.3 charges at a decent rate also. You’ll pull 11 kW on AC and up to 135 kW on DC. Now that doesn’t sound that impressive compared to the EV6 at 230ish…but then again, the iD.3 has a decent charging curve, and it’ll be a few years before we start to see 350 kW chargers in any significant number anyway to take advantage of those speeds.

Well, folks…we tried our best to avoid including a Tesla as we put the Model S in our other list, but it was impossible! So we’re throwing in the Model 3 Long Range as a bonus on top of our Top 5! It wasn’t luxurious enough to make our ‘Ultimate’ list so we’ve stuffed it in here despite being a little bit pricey!

Obviously, the Model S is the king of the motorway…but the Model 3 is just that bit more efficient, and a whole lot cheaper! Now it gets a bit tricky with the Model 3 because depending on when and where you bought it, you’re going to have a slightly different battery.

So we’re looking at the Model 3 with the 76 kWh usable pack stuffed with Panasonic cells. We just love the Long Range, prefer it to the Performance actually. For us, you get all the range, and still get blistering pace with 340 kW of motors getting you 0-62 mph in 4.4 seconds!

The WLTP rating for the Long Range is just shy of 400 miles, but that’s being a little bit optimistic. Now if you treat it nicely in summer you will get over 400 miles, maybe even 450. But we reckon even in winter conditions at motorway speeds, the Model 3 LR will comfortably clear 250 miles.

But what elevates the Tesla here is not just its range…it’s getting the car back on the road again during a long trip. On AC you’ll pull 11 kW which is good. But on DC, you’ve got the Supercharger network…and if you have a V3 stall on your route then you’re looking at peak rates of around 250 kW!

So we’ve used the term ‘budget’ a little loosely today, but it was all about range and you have to spend a bit to get it! It’s amazing to look at the options today compared to a couple of years ago…and it’s so exciting to think where we’ll be in another couple of years!

So, let us know what you think in the video comments. We love to hear from people all over the world.

There’s no way everyone is going to agree with our list…so we want to hear from you.
What would you take off, or add on? 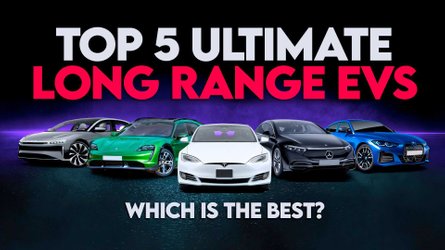 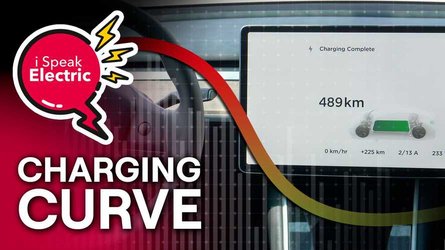