The modified M3 has a reprogrammed ECU and nothing else.

The BMW M3 offers a lot of performance straight from the factory floor. The M3 xDrive delivers 510 bhp (380 kilowatts) and 479 pound-feet (650 Newton-metres) of torque from its twin-turbo 3.0-litre inline-six, but a new Wrench Studios tune turns it up a notch. The Carwow YouTube channel is pitting the stock M3 against the tuned version in a series of drag races to gauge the tune's effectiveness.

Wrench Studios was able to crack the M3's ECU to tune it, wringing more power out the powertrain. It has no other modifications other than the ECU tune, which takes the stock output up to 600 bhp (447 kW) and 516 pound-feet (700 Newton-metres) of torque. That's an increase of 90 and 37, respectively. The M3s are identical beyond the tune, including sharing the same eight-speed gearbox and xDrive all-wheel-drive system, tipping the scales at 1,780 kilograms (3,924 pounds).

The difference the tune makes is instantly noticeable. While the first race has the tuned M3 getting a shaky start, it has no trouble catching and passing the stock performance saloon, leaving it to finish second place 0.5 seconds behind the tuned variant. The modified M3 crossed the quarter-mile finish line in 10.7 seconds. The stock M3 needed 11.2 seconds. It's the same result for the two rolling races, with the stock model unable to keep up. 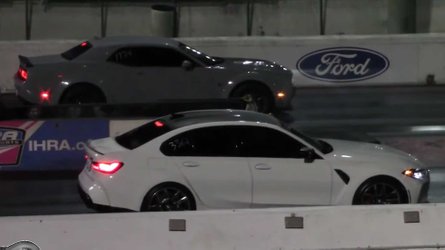 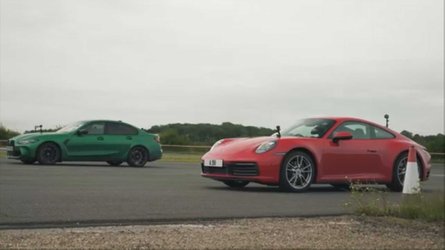 Base 911 Carrera causes trouble for M3 Competition in drag races

The final event is a brake test, and this is another area where the two BMW saloons differ. The stock model wears carbon-ceramic brakes, while the tuned one has steel shoes. However, it takes the two nearly the same distance to reach a complete stop, though the stock M3 edges out a win over the tuned model by a nose. The race shows that a bit of software can significantly improve a car's performance, though your mileage will vary.