Prices start at £28,495 once the government grant has been applied.

Citroen has re-jigged its e-C4 electric family car range to introduce a new entry-level model and make the line-up “more logical”. As a result, the range now starts from £29,995, although that can be reduced with the government’s £1,500 Plug-In Car Grant (PICG), for which the e-C4 is eligible.

The new-look e-C4 range still comprises three core trim levels, but the new Sense model is the starting point in the line-up. Featuring 18-inch alloy wheels, rear parking sensors and push-button ‘keyless’ start, as well as a 10-inch touchscreen infotainment system, the Sense is still well equipped. It even comes with the Apple CarPlay and Android Auto smartphone integration technology as standard.

Moving up the range brings us to another newcomer – the mid-market Shine Edition. Replacing the old Shine model in the e-C4 stable, it comes with extra safety technology, a head-up display and satellite navigation, plus front parking sensors, a heated steering wheel and a reversing camera. Prices start from £30,495 once the PICG has been applied.

Finally, the range is crowned by the current best-seller: the Shine Plus. That gets all the features of the Shine Edition, but adds wireless phone charging, upgraded speakers and heated front seats, as well as part-leather upholstery. That model is not eligible for the PICG thanks to its loftier starting price of £34,995.

All three versions of the e-C4 come with the same battery-electric powertrain, comprising a 134 bhp electric motor that drives the front wheels and a 50 kWh battery pack. That allows the car to reach speeds of up to 93 mph, while accelerating from 0-62 mph takes 9.7 seconds.

More on the Citroen e-C4: 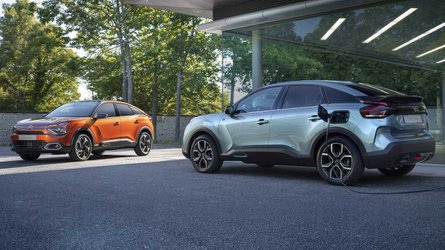 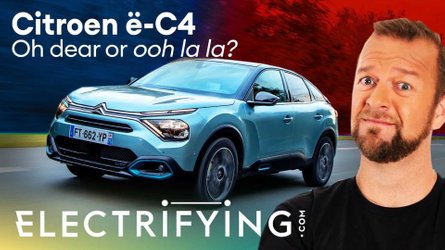 More importantly, the e-C4 has a range of up to 217 miles on a full charge, and it emits no carbon dioxide from the tailpipe. Partly because it doesn’t have one. That means the car attracts a low rate of company car tax, making it attractive to those whose wheels are funded by businesses.

The revamped e-C4 range also incorporates changes made to the e-C4 in October 2021, when Citroen tweaked the car to make it more efficient. Back then, changes were made to the heat pump and the transmission system, which were designed to give the car greater real-world range. According to Citroen, the changes increased the range by up to 18 miles depending on usage and environmental conditions, giving the family car “more versatility” and greater “peace of mind” on long journeys.