Ferrari LaFerrari test mule is back in black, spied again in Italy

Without a doubt, this is the sketchiest Ferrari LaFerrari you will ever see, and it comes straight from Maranello. Actually, this isn't the first time we spotted this exact Ferrari test mule, but its return raises some interesting questions.

The video comes from supercar spotter Varryx on YouTube, where we often catch secret Italian exotics in action. The last time we caught a LaFerrari-bodied test car was October 2021, about a month prior to the debut of the Daytona SP3. It was a bit different than the test car seen in this new video, but taking a close look at the number plate on the back, we can confirm this is the exact vehicle captured on camera last July. Rumours suggested these cars were test mules for Ferrari's next-generation hypercar, or possibly the next offering in the Icona series. 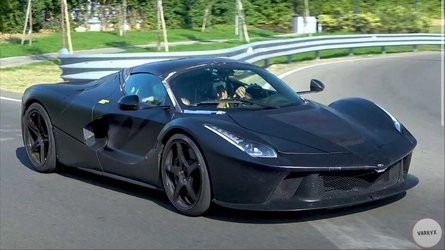 The Daytona SP3 was indeed the next Icona model, but this test mule is apparently still on active duty and it looks as janky as ever. The bonnet is wavy and misaligned, there's tape on the passenger side, and the upper portion of the rear fascia is as crooked as a desperate politician. Quad exhaust tips seemingly point up and in from the corners, though we doubt they're connected to anything because the brown screen in the middle looks like it's shielding centre-exit exhaust. And you know what recently revealed Ferrari has centre-exit exhaust? You guessed it – the Daytona SP3.

That's why we question the true intent of this test car. With the SP3 revealed, there's no reason to conceal testing with mules like this. That certainly suggests this car hides equipment not for the SP3, but for a future Ferrari hypercar. Or, it could simply still be in service as an evaluation vehicle for the Daytona SP3. Just because it's revealed doesn't mean the test cars become obsolete. Or hey, perhaps it's being checked out one last time for a farewell drive before going to the crusher.

Whatever it is, we're happy to see Ferrari still active and working on exciting cars for the future. We'll certainly be scouring our sources for details on these LaFerrari test cars and what their ultimate purpose truly is.