Check out the crossover’s high-performance upgrades, too.

The global semiconductor shortage that has affected so many automakers hasn’t spared Maserati. The company has had to delay debuting its Grecale crossover due to the issue, though the company has continued developing the new model. The latest spy shots caught the crossover sitting in a car park after some cold-weather testing, providing our closest look yet at the new model, including a great look at the interior.

Maserati covers the dash in these new photos, but previous spy shots showed the infotainment screen and dash-mounted clock. The fresh pics reveal most of the centre console, armrest, and doors, which are mostly covered in red leather. The passenger-side doors have brown leather, but this is a test vehicle. The photos don’t reveal much, though we see the interior styling and push-button door handles.

The new photos also allow us to see the Grecale’s Trofeo high-performance goodies in detail. That includes the bigger brakes with drilled discs, the red callipers, and the different tailpipes. The crossover in its Trofeo trim looks sporty, riding low to the ground, though the standard Grecale doesn’t have a high ride height. The new crossover will share the same Giorgio platform that underpins the Alfa Romeo Stelvio, which means the two should share powertrains.

The Grecale Trofeo could get the same twin-turbo V6 that powers the Stelvio Quadrifoglio, which makes 505 bhp (376 kilowatts) in the Alfa. There are also rumours that Maserati could put its new Netunno engine from its MC20 supercar into the crossover. The 3.0-litre twin-turbo V6 makes a whopping 621 bhp (463 kW), though we would expect Maserati to dial it back a bit for the Grecale.

Check out other Grecale spy pics: 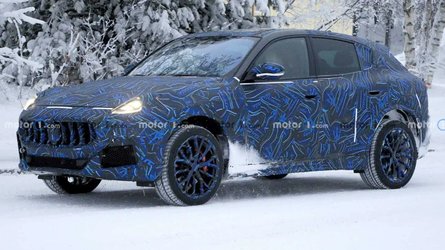 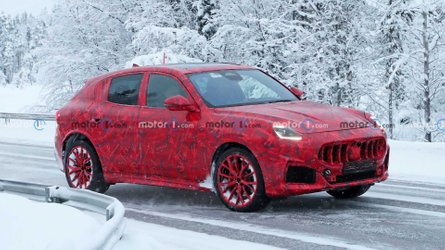 The semiconductor shortage has forced Maserati to delay the Grecale’s debut until sometime this spring. That means we could be several months away from seeing the Grecale Trofeo as automakers like to stagger debuting new models and their performance variants. A potent Grecale Trofeo will get enthusiasts excited, but most will likely opt for a standard Grecale, which we suspect will be much more vital to the brand’s bottom line.