The stretched version has the Maybach S-Class in the crosshairs.

With good reason, the Genesis G90 still feels relatively fresh taking into consideration the latest version of the luxobarge was introduced in 2018. However, that wasn't a second-generation model but rather a major facelift of the EQ900 originally launched back in late 2015 when Hyundai established Genesis as a standalone luxury brand. Now, the overhauled model is ready to fight the Germans.

The imposing Crest corporate grille is flanked by the familiar "Two Lines" headlight motif all the other Genesis models feature, including newcomers such as the GV60 and the G70 Shooting Brake. Speaking of the fully electric crossover, the revamped G90 also adopts a clamshell bonnet to give the front fascia a cleaner design with fewer visible gaps.

While the white car depicts the standard G90, the blue one is a long-wheelbase derivative stretched by 190 millimetres (7.5 inches) between the axles for greater rear legroom. Bear in mind it's not the first time Genesis is giving its flagship a LWB variant as the outgoing model spawned a Limousine version in its domestic market in early 2019. However, the new extra-long model will be a global offering rather than remaining a South Korean-only affair.

Both configurations have pop-out door handles and you can easily identify which is which by the sheer size of the rear doors installed on the Maybach S-Class and Audi A8 L Horch rival. In addition, Genesis has designed distinct 20-inch wheel sets, one more special than the other. We'd go with the intricate design of the SWB's alloys, but those look to be a real pain to wash given the plethora of interlinked lines.

The new G90 has some of the widest side turn signals we've ever seen on a production car, continuing the "Two Lines" theme of the snazzy split headlights. The same lighting idea is visible at the rear where there are separate rows of LED bars stretching across the entire width of the bumper and tailgate. The integrated boot lid spoiler echoes that of the previous-generation models, much like the trapezoidal dual exhaust tips.

Genesis is not disclosing any technical specifications for the time being, but the addition of a fixed glass aft the C-pillar tells us the stately saloon is longer than its predecessor. In regards to  the interior, our own spy shots of a prototype partially revealed what's in tow for the second-gen G90. Thankfully, the screen-heavy dashboard will not absorb the climate controls into the touchscreen since the test vehicle still had separate buttons for the HVAC system.

All the missing pieces of the puzzle should arrive in the coming weeks when we're expecting to see the posh cabin and discover the specs sheet. Sadly, Genesis says the G90 won't be coming to Europe, but at least the Old Continent is getting the swoopy G70 estate developed specifically for this region.

What has Genesis been up to lately? 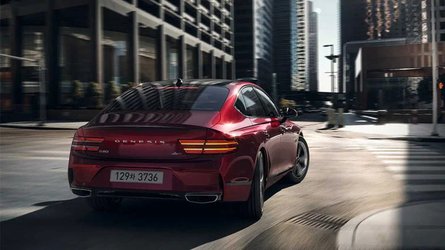 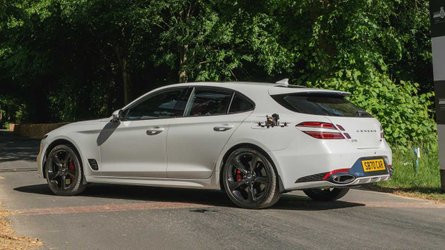 The company has had a busy 2021 what with the unveiling of the Electrified GV70 and Electrified G80 models joining the GV60 and the long-roof G70. We also mustn't omit the G80 Sport as Genesis is hard at work coming after Mercedes, Audi, and BMW by widening its portfolio while entering the Euro market for the first time.