We know it's coming. We just don't know exactly how it will look.

The next-generation Ford Ranger debuted to a global audience just before the Thanksgiving holiday in the United States. The new midsize truck will be sold in 180 countries, but not all of them will get a hardcore off-road Raptor version. For those that do – and that should include North America this time – here's a taste of what it might be like.

The optimal word here is taste, as these are unofficial renderings. We often turn to KDesgn AG at Behance.net for a look at potential future models, and these three Ranger renderings are very well done with all the details we'd expect in a Raptor model. The obvious difference is the prominent Ford branding in the grille, a Raptor trademark since the first-generation F-150 model appeared in 2010. The front bumper is also considerably more aggressive with vents, not to mention the tip of the visible skid plate underneath.

There's more familiar Raptor treatment at the rear, namely with the blackout strip on the tailgate. It gains even larger Ford branding, along with a small Raptor badge on the right side. Curiously, the wheels and tyres aren't significantly different in these renderings, and the ride height looks nearly identical. That's actually consistent with previous Raptors, as the trucks were never high rollers in that regard. A slightly wider stance could be in order, however. 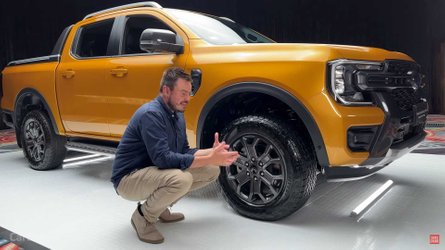 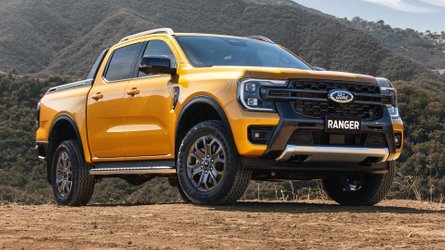 We already know a new Ranger Raptor is coming. In fact, we know it will debut rather soon – February 2022 to be exact, which should make it a 2023 model. A sneaky teaser video from Ford mentions the date with an audio track of a petrol engine revving, and it sure sounds like a V6 with a hint of turbo whistle. That's significant, as the previous Ranger Raptor used a boosted four-cylinder diesel that, at 210 bhp, didn't set the performance world on fire. It seems likely the new version will pack an EcoBoost V6, possibly the 400-bhp mill used in the Ford Explorer ST.

February will be here in the blink of an eye, so while these renderings are unofficial, we don't have long before the real deal is revealed.