Toyota GR Corolla officially teased for the US

It was a long wait, but things are finally happening.

It's finally happening! After lots of speculation, Toyota is officially teasing the GR Corolla hot hatch for the United States. Unfortunately, the image only provides a few scant details about the vehicle.

The folks at the GR Corolla Forum noticed the hidden Easter eggs in Toyota's Instagram post. First, the time to the upper right of the speedometer shows G16. This is a reference to the G16E-GTS 1.6-litre turbocharged three-cylinder engine that powers the GR Yaris.

Next, the road on the navigation system is GR Four. This refers to the sophisticated all-wheel-drive system.

Finally, squint at the right side of the image to see a tiny, camouflaged GR Corolla on the road. It's so small, that we can't discern any details, beyond the vehicle having a hatchback body. 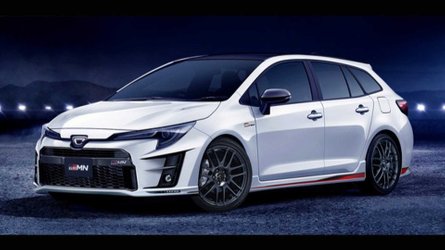 Toyota GR Corolla could be followed by an estate

It's worth noting that this image is an existing Corolla photo, and the company adds these hidden details to the picture. This means that the cabin on display here is not of an actual GR Corolla.

Rumours about a GR Corolla have circulated since the debut of the GR Yaris. Toyota even fanned the flames in a tweet that said: "While GR Yaris isn't hitting the states…perhaps it's time the U.S. got a hot hatch to call its own."

The leading info is that the Corolla GR would arrive in late 2022. Let's hope we don't have to go through a year of teasers before Toyota finally tells us all of the details Earlier reports suggest it might make as much as 296 bhp (221 kW) from a tuned version of the 1.6-litre three-cylinder. Although, this new teaser image suggests otherwise.