But is it actually a saloon?

The death of the Volkswagen Passat has been greatly exaggerated because the Aero B won't replace it right away. The conventionally powered midsize saloon has been confirmed to get a new generation, twinned with the Skoda Superb, meaning it will go on to live until around the end of the decade. By then, it will likely be time for the Aero B to get a second generation, which might indeed serve as a Passat substitute in the EV era.

Caught testing the Austrian Alps, the Aero B seemingly had the production body but with deceiving Jetta stickers plastered onto the headlights, front grille, and taillights. Those fake exhaust tips are also taken from the compact saloon, and there's something fishy going on with the door handles as we believe the real ones are also cleverly hiding underneath stickers. The handles appear to be sitting flush with the bodywork as with many recent EVs for better aero.

Here's a burning question – is the Aero B really a saloon? We'd wager it's actually a more practical liftback because the rear end seems to be too short for a conventional boot lid. We're getting the feeling it's along the lines of the Arteon rather than the Passat, which would be great. Chances are the prototype has a tailgate, making it easier to load and unload cargo. On a personal note, all saloons should be liftbacks.

You can tell this is an electric car because the Aero B looks bulkier than a Passat or Arteon since it has to carry around a lot of batteries between the two axles. That said, we're glad VW is finally making a saloon / liftback on the MEB platform for people who are not into SUVs and find the ID.3 too small. Speaking of existing dedicated EVs from Wolfsburg, logic tells us the production model won't be called Aero B, but rather something with ID.

It is believed VW intends to sell the car with a single-motor, rear-wheel-drive configuration and a hotter dual-motor setup for an all-paw GTX to mirror the ID.4 and ID.5 GTX models. The top-spec model is expected to do 0 to 62 mph (100 km/h) run in approximately 5.6 seconds, which would be pretty decent given the size and heft of the Aero B.

Those in need to carry more cargo might get an estate as previewed by the ID. Space Vizzion concept about two years ago. The all-electric estate could end up as the de facto Passat replacement since rumour has it the next (and possibly final) generation of the gas- and diesel-fuelled model will come exclusively with a long roof.

VW will launch the road-going Aero B in 2023, following next year's debut of the hotly anticipated ID. Buzz.

An electric saloon is coming from Volkswagen: 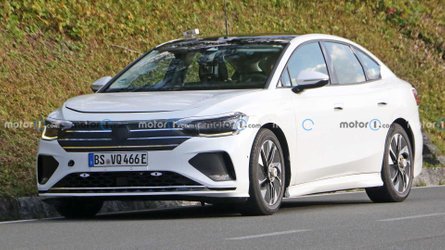 Volkswagen Aero B electric saloon spied up close on the street 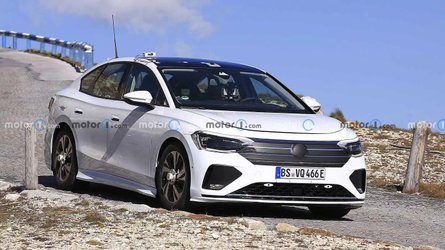