But is it faster than an M3 Competition?

Some people seem to forget that Alfa Romeo also has a strong history of high-performance saloons. There was the twin-cam Giulia from the '60s, the Milano Quadrifoglio Verde from the '80s, and the 156 GTA in the '00s. The Giulia Quadrifoglio continues that lineage to this day.

If that's not enough, Alfa Romeo also rolled out the limited-run GTA and GTAm editions of the Giulia Quadrifoglio. These are lightened, more focused versions of the hot saloon, especially the GTAm version. The GTAm even has its rear seats deleted, along with the addition of harnesses and Lexan windows. These special models also get a power bump. From 503 bhp, it rises to 533 bhp.

Unfortunately, the GTA and GTAm have been sold out. Alfa Romeo only made 500 examples of these cars with the latter being the rarer version. There aren't a lot of people that were able to review it, nor do an instrumented test to confirm the factory performance claims. If you always wanted to know the real-world numbers of this breathed-on Guilia Quadrifoglios, now is your chance. 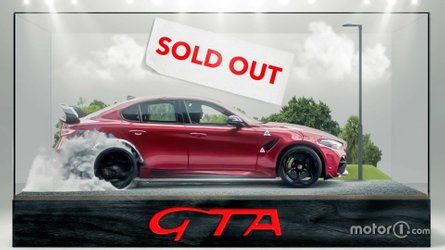 French publication Motorsport Magazine managed to get a hold of the rare beast. They also recorded its run so we see just how it did. That said, there are a few things to take note of in the run. The run was performed on a rather gloomy day and the road surface might be a little cold. Secondly, this particular GTAm spun its wheels at the 56 mph mark, costing it a few tenths. Nonetheless, it's an impressive display.

Despite the slip-up and conditions, the Giulia GTAm still did the 0-62 mph run in less than four seconds. It reached 124 mph in a shade under 12 seconds, and blew past 155 mph in about 20 seconds. Those numbers are comparable to the BMW M3 Competition, albeit the rear-wheel drive version. We reckon the GTAm might have gone a little bit faster under better circumstances. If might even match the factory claims of 0 to 62 mph in 3.6 seconds.

But if those numbers don't impress you, perhaps the sound will. Besides, the Ferrari-engineered engine makes all the right kind of noises.