Qatar GP: Hamilton storms to F1 pole ahead of Verstappen

Valtteri Bottas finished third, with the final runs in Q3 featuring Pierre Gasly, who ended up fourth getting a dramatic puncture at the end of his final lap.

Hamilton led the way after the opening runs in the final stages with a 1m21.262s, with Verstappen edging ahead of Bottas but still with 0.162s gap to close.

But Hamilton, who ran at the head of the pack for the final fliers, put pole out of reach almost from the off on his final lap, as he smashed the fastest time in the opening sector by over 0.3s.

He held his advantage as he completed his run, setting a 1m20.827s – the only driver to reach the 1m20s as he became scored the first F1 pole at the Losail track.

Behind Hamilton on the track right at the end, Gasly ran very wide out the high-speed 90-degree right of Turn 15 ahead of the final corner, the AlphaTauri bouncing over the raised exit kerbs where its front wing and left front practically exploded.

Gasly carried on around the final corner, which meant yellow flags briefly flew, but they were in before Bottas and Verstappen came around in the Frenchman's wake.

The former could not improve his Q3 personal best and stayed third, while Verstappen was able to go quicker but not by enough as he wound up second 0.651s slower than Hamilton.

The front three will start Sunday's race on the medium tyres after getting through Q2 on that compound, as did Ferrari's Carlos Sainz.

Lando Norris set a personal best on his final lap to score sixth ahead of Sainz, with Yuki Tsunoda, Esteban Ocon and Sebastian Vettel rounding out the top 10.

Ocon's ninth place followed, the Frenchman complaining about severe vibrations as he braked during Q1.

In Q2, Sergio Perez was a shock elimination in 11th – the Mexican one of several drivers that had to abandon their plans to progress on the mediums, but his 1m22.346s on the softs was not enough to beat Sainz's lap on the mediums, which meant the Ferrari driver squeaked through the second segment on the preferable race tyre in 10th. 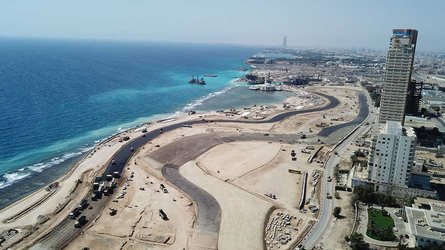 How Tilke carved out a unique F1 circuit in record time
⠀ 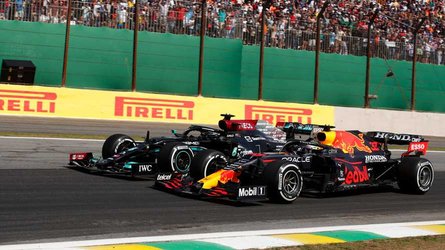 Why Mercedes' right of review into Brazil F1 incident was denied

Lance Stroll was 12th ahead of Charles Leclerc, who was left perplexed at his lack of pace throughout Q2.

He was slowest of the 15 runners after the opening efforts with most cars on the mediums and although he improved after taking the softs it was only good enough for 13th.

Daniel Ricciardo had a similar story as he was eliminated in 14th, ahead of George Russell, who completed an offset run plan in the middle segment, setting his final lap with just under five minutes remaining while the track was otherwise empty.

In Q1, Kimi Raikkonen was edged out by Stroll's late improvement, which meant he was knocked out in 16th, just ahead of Nicholas Latifi, who was the first driver to take the chequered flag at the end of opening segment and was the only eliminated Q1 runner not to set a personal best on their final effort.

Antonio Giovinazzi was 18th ahead of the two Haas cars, with Mick Schumacher leading Nikita Mazepin.

The Russian's difficult event continued in Q1, as his FP2 absence as he was switched to a new chassis and the FP3 red flag caused by an engine control unit problem were followed by his front wing hanging at a funny angle during the early stages.

It meant he had to pit to get it changed, the first wing dragging along the floor by its endplates due to the drop, and Mazepin eventually ended up last with a best time over two seconds slower than Schumacher's.