Why Mercedes' right of review into Brazil F1 incident was denied

The decision – which centred on the stewards' insistence that the new footage would not make them question their call to consider the incident an example of F1's 'let them race' principle – means Mercedes' request that the decision not to investigate Verstappen's aggressive defensive be re-examined will go no further.

Mercedes' decision to make an appeal to try and get the Interlagos stewards to look at the incident at the track's Turn 4 left-hander during the latter stages of last weekend's race, which Hamilton went on to win with a successful later pass at the same corner, came about after it was able to see the forward-facing onboard camera footage from Verstappen's car for the first time. 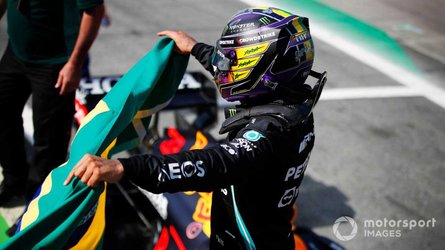 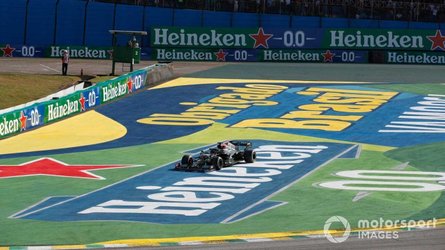 During the race, this was unavailable to the stewards, who, the FIA document announcing that Mercedes' right of review request had been denied stated, had been "already looking at the available footage" when "the race director [Michael Masi] asked the stewards for their view and stated that it was going to be 'Noted' on the timing screens".

This is a key part of the reason why Mercedes' right of review request was denied, because when the stewards – and not Masi – decided that there was no need for an investigation into Verstappen's move, fast back up the inside line on the left of Hamilton's Mercedes just ahead of the Turn 4 apex, they had therefore reached a "discretionary decision".

The stewards said this decision is "the motor racing equivalent of "Play-On" in other sports" and they felt that even though additional footage would become available at a later point "just as with referees' decisions in soccer, it does not seem desirable to be able to review any or all such in-race discretionary decisions up to two weeks after the fact".

They added: "The stewards therefore seriously doubt that the intent of the Right of Review in the International Sporting Code is to enable competitors to seek a review of such discretionary decisions that do not follow on from a formal inquiry by the stewards and do not result in a published document."

In effect, the Sao Paulo stewards – Tim Mayer, Matteo Perini, Vitantonio Liuzzi (driver steward) and Roberto Pupo Moreno, who held the right of review request hearing via video conference – are saying that a 'let them race' decision is a discretionary call that could not be reviewed.

This was, they stated, because of the wording of Article 14 of the ISC – "the decision concerned" – something they are required to come to by Art. 47.1 of F1's sporting rules, which states "it is up to 'the stewards to decide whether or not to proceed with an investigation'," per the FIA document.

As Mercedes was arguing that the decision not to proceed with an investigation should be assessed, the stewards explained that "in this very specific case determine that the 'Turn 4 incident involving cars 33 (Ver) and 44 (Ham): no investigation necessary' constitutes a decision".

But when asked to assess whether a review should be made by Mercedes' request, the stewards explained why the additional footage would not change that initial discretionary decision.

The first three 'tests' were indeed met by the new footage, which had to be downloaded from Verstappen's car post-race, as only one feed from each machine can be broadcast live during F1 sessions – with the rearward facing shot being active as Hamilton initially attacked at Turn 4.

In arguing the new footage met the 'new' test, Mercedes recalled the 2020 Austrian GP qualifying incident that led to Hamilton being handed a three-place grid drop.

That call came after additional footage from the 360-degree camera Hamilton's car was carrying revealed, when it was released ahead of the race the next day at the Red Bull Ring, that he had passed a visible yellow flag after teammate and eventual polesitter Valtteri Bottas had gone off ahead.

There, the Sao Paulo stewards explained, "the footage absolutely changed the decision of the stewards and was thus significant".

Mercedes was allowed to play Verstappen's forward-facing video for the stewards in its attempts to argue its significance – presented in a "side-by-side comparison with the previous lap", per the FIA document.

But the stewards insisted that the footage "shows nothing exceptional that is particularly different from the other angles that were available to them at the time, or that particularly changes their decision that was based on the originally available footage".

Essentially, the stewards felt that not only did the additional footage not show anything exceptional that might cause them to change their decision, but they had also already decided that when viewing the available footage before and after Masi's message that the incident had been noted.

If they had felt they needed to see the missing onboard, the stewards would have opened an investigation to be held after the Interlagos race had concluded so that they could view the on-board footage as soon as it had been downloaded.

But they had already decided that the available broadcast options sufficiently allowed them to decide it was a racing incident under the 'let them race' approach and that Verstappen and Hamilton should be allowed to play on.

As they did, the Mercedes driver got by 11 laps later and went on to take a famous victory.