The revamped hatchback has a 204 bhp 2-litre petrol engine.

The new Volkswagen Polo GTI is now available to order at UK VW dealerships with prices starting at £26,430. Hot on the heels of the other, less powerful models in the facelifted Polo line-up, the new GTI comes with a 2-litre turbocharged petrol engine producing no fewer than 204 bhp.

Paired with a seven-speed automatic gearbox as standard and front-wheel drive, the pocket rocket is capable of 0-62 mph in 6.5 seconds. Flat out, it’ll travel at 149 mph. That power is combined with reworked suspension to lower the car by 15 mm compared with other Polo models,

By the same token, Volkswagen has fitted a larger front anti-roll bar, more rigid coupling rods at the front and stiffer axle-locating mounts at the rear, all in a bid to improve body control. Perhaps more importantly, VW has added a clever XDS electronic differential lock that can control brake pressure on the front wheel on the inside of a bend to prevent it spinning.

That system is joined by the Adaptive Chassis Control DCC system with drive mode selection. That enables the driver to pick one of four different modes that tweak the settings of the steering, engine responsiveness and automatic gearbox. One of the settings is a customisable option that allows the fine-tuning of the car’s characteristics.

On the surface, the Polo GTI is set apart from its less powerful stablemates by the trademark red GTI badge and honeycomb air intake grilles, as well as the red trim above the LED daytime running lights strip. That strip runs right the way across the front of the car, as it does on the latest Golf and VW’s ID. electric models.

Inside, the GTI comes with black roof lining and red contrast stitching, as well as the legendary GTI ‘Jacara’ check pattern on the seats. The dash panel is finished in Kings Red Glossy, although customers can choose the slightly less garish Deep Iron Glossy.

Standard equipment is broadly in line with other high-end models in the Polo range, with a digital instrument cluster joined by an eight-inch touchscreen, two-zone climate control and 17-inch alloy wheels. Options include a 300-watt Beats audio system and a range of colours including Kings Red Metallic and Reef Blue Metallic, as well as a black contrast roof for red-, white- or blue-painted cars.

More on the latest-generation VW Polo: 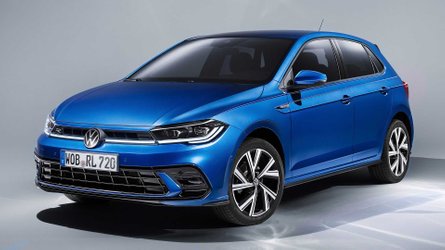 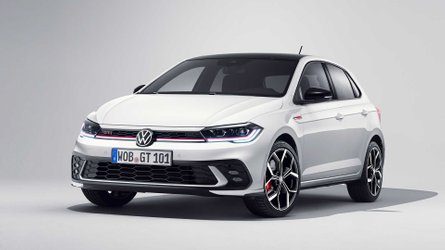 “The marriage of ‘Volkswagen’ and ‘GTI’ kicked off in 1975 with the launch of the now legendary Golf Mk I GTI,” said Lisa Hartley, the Polo product manager at Volkswagen UK. “Since then, those hallowed three letters have adorned many other models such as the Scirocco, Lupo and up!. However, it is the Polo – whose GTI model debuted in 1998 – that is, after the Golf, the longest running member of this sporting family.

“Continuing this illustrious history is this newest version of our pocket-rocket, and it really is the best so far. With driver-focussed dynamics, a powerful 204 bhp turbocharged engine, big-car tech, a generous list of standard equipment, and classy, assertive yet understated looks, the new Polo GTI is a class act among hot hatches.”