Nailed It: Karma gets revenge on driver stealing parking spot

Either that, or someone confused the accelerator and brake pedals.

Where there's a will, there's a way. And apparently, it was this will of this SUV driver to absolutely get that empty parking space in the garage. In fact, the will was so strong that the driver ghosted another car backing into the spot, then crashed into a wall before stopping. But hey, got the space, right?

This brief but thoroughly entertaining video comes to us from Reddit, but what you see is what you get. We don't know exactly where this parking faux pas took place, but the Beh Chia Lor watermark in the video points to Singapore. A time stamp on the video lists the date as October 29, and some automotive sleuthing suggests the offending SUV is a Nissan Kicks. The innocent bystander? That would be a Toyota Prius.

The clip is pretty straightforward. Surveillance footage shows the Toyota driver slowly backing into an empty parking space at the top of a ramp. A few seconds later the SUV enters the frame, and for a very brief moment, we think the driver is stopping. Instead, an obvious burst of acceleration sends the Nissan past the Toyota into the open space, but that's not the end of it. The Kicks went full send into that spot, hitting what we think was either a wall or solid barrier based on the way it bounces backward. The video ends with the Toyota driver staring at the Nissan, hands on hips as if to say instant karma's gonna get you. 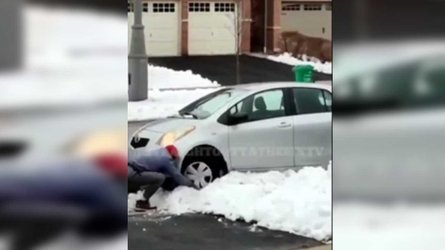 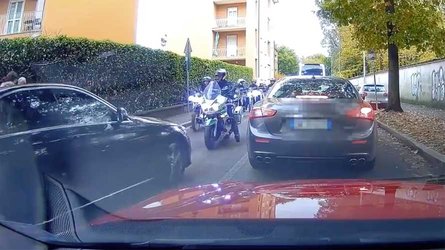 Drivers get a dose of karma after illegally passing traffic

Taking a closer look, we wonder if this was actually an accidental confusion of pedals. The Nissan clearly slows upon approaching the top of the ramp as if letting off the accelerator, and the Toyota should've been visible prior to that point. Furthermore, it appears the Nissan actually hits the Toyota as it zips past. We could be naive with our faith in humanity, but we have to believe a driver wouldn't make that bad of a judgement call. Mixing up the throttle and the brake? It happens, and it could be a plausible theory here.

Either way, stay safe out there people and yes, that includes rolling through crowded parking garages hunting for elusive empty spots.