Ferrari has more test vehicles out and about than seems possible for the supercar company, but there’s been no shortage of prototypes spotted out in the wild. The company is readying a return to Le Mans while rolling out a new Icona model, so pinning down Ferrari’s intent with each test vehicle isn’t easy. The latest spotting comes from the Varryx YouTube channel, which captured a matte black Ferrari LaFerrari heading out for unspecified testing.

It’s not clear what Ferrari is testing, though the engine sound gives a hint – it sounds turbocharged. If that’s the case, this LaFerrari could be a test vehicle for the company’s Le Mans racer. The company’s next Icona model will use the company’s naturally aspirated engine from the 812 Competizione – and that doesn’t sound like this one. The LaFerrari in the video also lacks any coverings, unlike the most recent Icona test vehicles we’ve seen.

The new Icona is set to debut this November, but it’ll have a mid-mounted naturally aspirated 6.5-litre V12. The 812’s engine produces 819 bhp (619 kilowatts) and 510 pound-feet (692 Newton-metres) of torque; however, it could make a bit more in the Icona. The car will allegedly take styling cues from the 330 P4 race cars from 1967. Spy shots have revealed the hypercar with narrow taillights and an integrated spoiler, though camouflage has covered much of the vehicle. 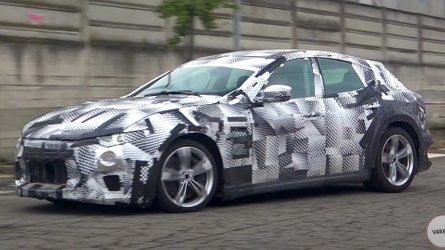 There’s also the possibility, albeit slim that the matte black LaFerrari is an early prototype for a new road-going hypercar. The next Icona is likely the last combustion-only Ferrari as the company begins electrifying its lineup, so the next-gen Ferrari hypercar will likely use a turbocharged engine paired to an electric motor for some truly bonkers output numbers. The company hasn’t announced its next halo car, though we’d bet it’s already under development even if we haven’t seen it yet.