Convertibles are not practical? Think again.

We frequently joke about how convertibles technically offer unlimited headroom when the roof is down, but as it turns out, they're actually more practical than that. A second-generation Renault Megane in the hardtop convertible body style was filmed in Craiova, Romania – which happens to be where yours truly lives – carrying no fewer than five PVC plumbing pipes.

As if that wasn't weird enough, it was raining that day, but that didn't stop the driver from putting the metal roof down to make room for his extra-long cargo. As the video shows, he was basically stalked in traffic for more than five minutes by the car behind. The onboard dashcam captured the unusual footage depicting a convertible doing a pickup truck's job.

To give credit where it's due, the pipes do appear to be secured firmly in position as they don't seem to be moving at all while the driver navigates through the city's rather busy streets. Nevertheless, it goes without saying this is still a bad idea, for multiple reasons. It represents a real hazard to put pipes in the back seats as something could go horribly wrong following a sudden reaction from the driver to avoid an accident.

When it rains, it pours: 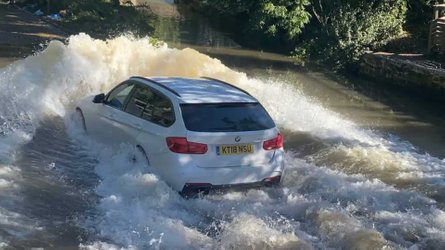 UK: Watch drivers plough through deep water without slowing down 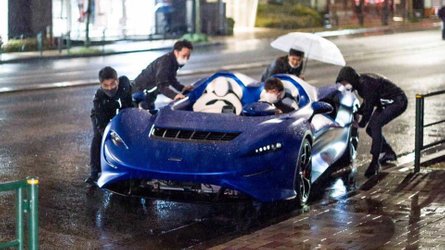 Those pipes can easily fall over and hit another car, or even worse, injure the driver or a nearby pedestrian. Thankfully, that wasn't the case here. Adding insult to injury, he barely used the turn signal to signal his next manoeuvre, thus increasing the risks of an accident furthermore.

And then there's the rain, which although wasn't that bad, damage to the interior cabin caused by water can really hurt one's wallet. The Megane CC's owner did have the wind deflector up for whatever reason.

Even though the driver wasn't pulled over by police, he still might get into trouble as the video is being aired on Romania's biggest news channel and the car's number plate is perfectly visible.