It does the quarter-mile in 7.47 seconds.

This summer, the Audi RS3 Saloon set a new record for a compact car on the Nurburgring in production form. Today, we want to share the story of a much faster Audi with you, albeit one that has very little to do with the performance saloon from Ingolstadt. Friends, meet what is now considered to be the fastest all-wheel-drive Audi in the world.

The video above was filmed at the Arad International Airport, 2.4 miles (4 kilometres) west of the city of Arad in western Romania, where Konstantin Dinev from Bulgaria set a new record for the fastest Audi AWD with a time of 7.47 seconds on the quarter-mile run and a terminal speed of 188 miles per hour (303 kilometres per hour).

Under the bonnet, this Audi S2 has a 2.2-litre turbocharged inline-five engine fitted with a concrete-filled engine block from a 2.5-litre diesel. The new block helps the five-cylinder unit resist over four bars of boost coming from the massive turbocharger. The result is 1,332 bhp (1,350 PS / 993 kilowatts) on the wheels or approximately 1,479 bhp (1,500 PS / 1,103 kW) at the crank.

The power reaches the wheels through a special clutchless Liberty drag transmission working with compressed air to shift the gears. The power flow with this gearbox is never interrupted between gear changes, which allows for extremely consistent output from the engine to the wheels. The car was designed, assembled, and tested by Bulgaria’s Heed Auto team.

Record-setting Audis from around the world: 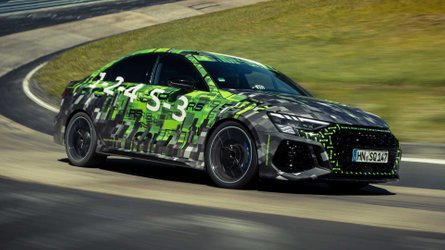 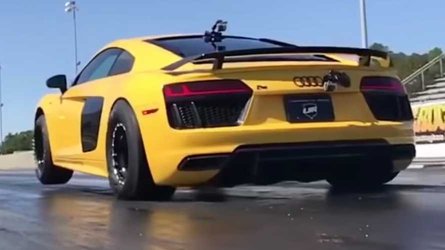 Speaking of that, we heard from the folks behind the project that this is the second-fastest Audi in the world overall, being beaten only by a rear-wheel-drive Audi in America doing the quarter-mile in the mid-six seconds. Unfortunately, we weren’t able to find more information about this car to confirm its existence.

As a final note, during the same race in Arad, a 1,000-bhp (735-kW) Volkswagen Lupo hit the race semaphore, which was then hit again by a 1,200-bhp (883-kW) BMW 3 Series E36. Luckily, no one was hurt in the accident and the semaphore was repaired just in time for the final round of drag races this past weekend. A video from the accident is attached below.