The vehicles have been converted to become "protected personnel carriers", or PPCs.

Ford’s new five-tonne Transit van has gone into service with UK police forces, where it is being used as a protected personnel carrier (PPC, or ‘riot van’). With a larger payload than the standard Transit van, the new five-tonne model can accommodate enhanced weight-bearing safety equipment.

The Blue Oval has won a contract to supply police with 400 of the new vehicles to forces up and down the country. Over the next four years, the new vehicles will enter service with capacity for up to 10 police officers, or nine if specified with a single-containment cell, which can be fixed or removable.

The vehicles, which have been converted to UK police specification by Ford’s Qualified Vehicle Modifying partner, Safeguard SVP, also come with storage areas designed to hold “enforcement equipment”. That means occupants will have easy access to equipment such as riot shields and personal protection equipment.

In addition, the PPC vehicles come with additional weight-bearing protection on the roof, as well as an armoured underbody. There’s even protection for the fuel tank, radiator and exhaust pipe. Furthermore, the vehicles are also fitted with an under-bonnet fire suppression system and run-flat tyres.

Under this armoured skin, the vehicles are based on the new five-tonne Transit, which has uprated underpinnings to carry the extra weight. The hub assemblies are tougher, while the wheels are shod in wider 205 mm tyres and the rear brakes have been beefed up to cope with the heavier loads. Panel van versions of the new model also come with reinforced upper body structures and ancillaries to support the increased cargo weights.

No matter which body you pick, the vehicle is powered by a 2-litre EcoBlue diesel engine, which delivers 168 bhp and sends it all to the rear wheels, giving the best traction when the vehicle is fully laden. Customers can choose between a six-speed manual gearbox or the 10-speed automatic also found in the Mustang muscle car.

Terry Adams, the man in charge of Ford’s so-called ‘blue light’ sales team, which deals with vehicles bound for emergency services, said the Transits would play a key role in policing.

“Our business at Ford is to make our customers’ businesses thrive – in this case, the business is keeping our emergency services safe in the most hostile environments, and our new five-tonne Transit is the perfect tool for the job,” he said. “We’re absolutely delighted to win a four-year tender, placing Transit in a very important role for such an important organisation.”

More on the Ford Transit: 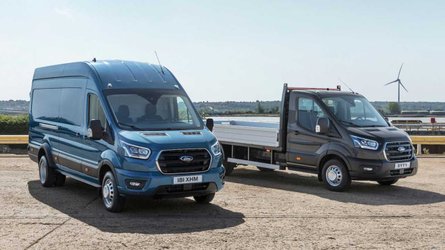 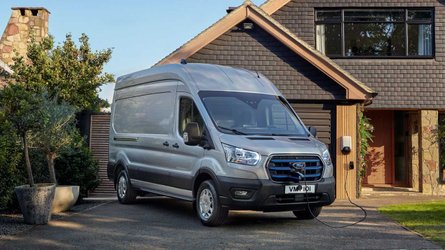 Ford E-Transit priced from £42,000 in the UK, more info released