Is this the next Ferrari Icona model?

For the last year, Ferrari has been testing chopped-up LaFerraris, though we only recently learned what they could be for. The company is allegedly planning to debut a new Icona series model in November, and those camouflaged and confusing LaFerraris we’ve been seeing could have been the test vehicles. A new video from the Varryx YouTube channel captures a heavily camouflaged example out testing on public roads.

This one is better concealed than previous examples, which could indicate it is another step closer to a full reveal. The thick cladding underneath the black wrap distorts the model’s shape, which is rumoured to have some retro styling while sharing a platform with the open-top Ferrari LaFerrari Aperta. However, there’s at least one noticeable difference – the side-view mirrors. They’re positioned on the front wings/fenders instead of at the base of the A-pillars. It supposedly takes inspiration from the 1967 Ferrari 330 P4 race car, which sports curvy wing/fender arches and a unique spoiler.

If this is the next model in Ferrari’s Icona series, then it could sport Ferrari’s naturally aspirated 6.5-litre V12 from the 812 Competizione. It produces 819 bhp (619 kilowatts) and 510 pound-feet (692 Newton-metres) of torque, though it could make even more in the Icona. Earlier this year, Ferrari’s technical boss went on the record saying that the company was working on a beefier variant of the V12. Spy shots have shown LaFerrari test vehicles with tweaked exhaust systems. 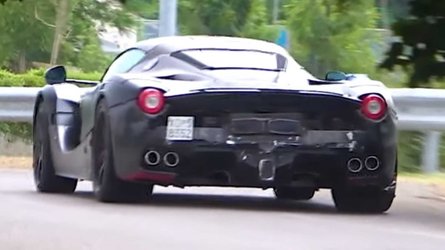 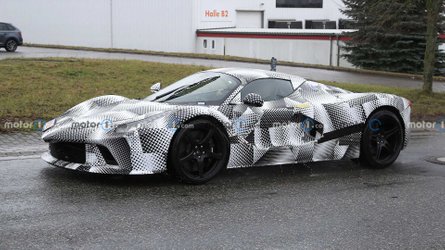 The new Icona model follows the brand’s Monza SP1 and SP2 Speedsters that broke cover all the way back in 2018. Ferrari built fewer than 500 units of the SP1 and SP2, and there’s little doubt the newest model will have a limited production run. There’s also a chance that the LaFerraris we’ve spotted are being used to develop something else entirely, though the company is clearly working on something. Rumours point to Ferrari unveiling the next Icona model at the Finali Mondiali this November.